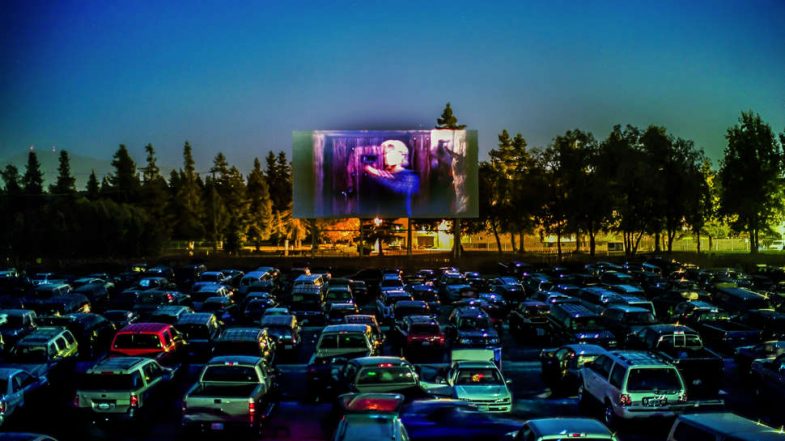 Last week when the walls came crashing down around the business of motion picture exhibition, 631 theaters were still in operation and not shut down. The top six box office performers were drive-ins. There are many reasons why this happened; a sense of safety, a need for proactive social distancing, and control of the environment where you watch movies. In my mind, though what happened was moviegoers ran to the embrace of an old reliable friend. A friend that in this time of confusion and panic reminded us what was good about going to the movies.

At one time I owned a drive-in. It was going to be sold for the land value and I could not let that happen. It was in shambles. The screen needed a paint job. The concession area had to be totally rebuilt. They had a popcorn warmer and a 1942 Cretors Popcorn machine with a far too small 16oz kettle. It did have a workable 3 chambered sink and a hand washing basin. I decided to use a sledgehammer to take the old counter apart and managed to hit myself squarely in the shins. We rebuilt the bathrooms.

The projector was an old RCA with a bulky platter. We had to get the projector back into working order. They no longer made oil for the projector so we used oil intended for use in a Mercedes Benz car. I went and bought a xenon bulb and when we fired the projector up and ran an odd reel of a kung fu film through it, I was hooked.

The spring breeze blew on my face as I watched images dance on a 100-foot screen. The audio crackled through an old speaker the previous owners hung on a pole. The magic that that place exuded was tangible. It took us six weeks of long hard work to rebuild that drive-in. In exploring the back storage room we found old date boxes, Photoplay magazines, reels of National Anthems, and other treasures. This was history, this was culture….this was us.

My leg healed. I set up accounts with studios with the help of my drive-in mentor, Buck Kolkmeyer. Buck has been a big influence on many things in the business, and I learn from him constantly. I ordered the first batch of concessions, focusing on deep variety with retro candies and set up a self serve station for soda. I went with Pepsi, the bag in the box was a bit cheaper and on a personal level, I have always been a Pepsi man. We set up stations for hotdogs, nacho chips, pretzels, ice cream, and Chilly Dilly Pickles. I had a blast.

I went and booked our first movies, even though this was a drive-in and the rental rates per movie were cheaper, I was still taken aback on how much the studios wanted of the box office.

It was opening day. My wife worked at the box office. It was a wonderfully soft and gentle evening. The people who came that night had more than fond memories of the drive-in. They were curious to see what we had done with it. They seemed to approve. They came, bought their concessions and put out their lawn chairs. The kids kicked soccer balls or tossed a frisbee. The sun began to set. I walked over to the ticket booth and was gratified to see a line of car lights approaching our drive-in.

We began the pre-show for the first time. We played the National Anthem, a series of trailers, and the first feature began. I walked out the door of the concession stand and looked at what we created. This was special. Families played, couples held hands and people enjoyed watching a movie in the best environment for movie watching ever created. The sound of our old projector in the background, the FM audio blaring through car radios and the sound of families talking. This is at its core the heart of movie-going.

The spring gave way to summer which gave way to fall. When I was forced to close the drive-in in the late fall due to weather, I knew I would miss deeply the sound of corn popping, the crackle of car speakers, and chatting with people as they went through the concession line.

There should be little doubt that the business of exhibiting motion pictures is in deep jeopardy. It had begun a decline due to streaming, high prices, and frankly insipid movies. The rise of the coronavirus further accelerated the peril it was in. I do not know what will happen, but I suspect the following.

I firmly believe one or more major circuits are going to be placed in some form of bankruptcy. Cineworld has pulled its remaining line of credit in order to hopefully weather the storm. AMC has furloughed all its executives. Credit analysts feel that if closures go on for more than three months, the collapse of the exhibition business as we know it will occur.

Hopefully, if movie theaters do re-open sooner there is still the problem of needing proper lead time and there will be a lack of product. This viral plague will change habits in consumers. People will be tentative in venturing out into a communal facility. The weeks of isolation might break movie-going habits. No amount of overstuffed chairs and chicken tenders are going to compel audiences to come back in any great number immediately. Thye will still be scared.600 Chinese movie theaters opened and then were forced to close again by the government. Since January, 70,000 Chinese movie theaters have been shuttered. It is now estimated that they may be closed well into May.

I expect that we are going to be dealing with a much-changed business as we exit this viral spring. Schools are going virtual, graduations and weddings are being put on hold. Things are changing rapidly.

My deep prayer is that the studios will begin to understand the need for a theatrical release and that they are hurting themselves by using this tragedy to eradicate the windows.

In the end, my hope is that people will begin to rebuild the tradition of movie-going. The drive-in will have to lead the way. The world has gotten way too fast and far too complex. People of all generations hunger for a true movie-going experience. An experience that reminds us of the simple fun movie going should be.

There is nothing better than a movie shown on a warm summer’s night under a blanket of stars, fresh popcorn, and the laughter of family and friends. The future of true movie-going is it’s past…..the drive-in.