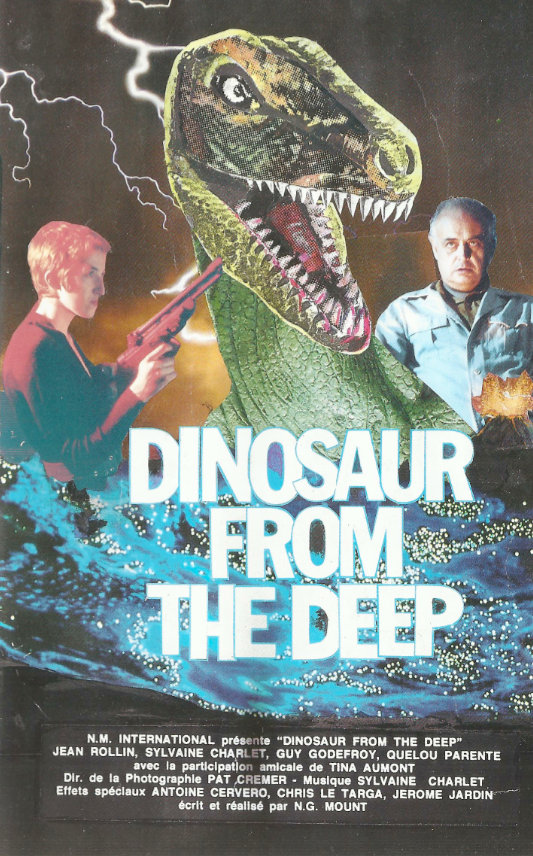 Professeur Nolan (Jean Rollin) leads a group of scientists on a time travel experiment, which leaves them on a small island where soon they’re fighting for their lives as they come under attack by a deadly dinosaur.

DINOSAUR FROM THE DEEP comes from director N.G. Mount and it’s certainly one of the worst films of its type. I think the film enters a level of badness to where the viewer can get some mild entertainment just out of seeing and wondering how much worse it’s going to get. I’d be shocked if the budget was over a couple thousand dollars as everything about this picture has a very cheap feel to it.

This here includes the dinosaur scenes, which are extremely bad and especially for 1993. These effects might have passed in the silent era but even those low-budget Roger Corman pictures of the early 80s featured better effects. Obviously you’re not expecting the quality of JURASSIC PARK here but these effects are so awful that the ones seen in CARNOSAUR appear to be ground-breaking. Another major problem with this film is the fact that the special effects are just as bad. Just check out the scene where a man has his eye ripped out.

The one interesting thing about the picture is that it does feature French director Rollin in the lead role. If you’ve seen his films like THE LIVING DEAD GIRL and THE RAPE OF THE VAMPIRE then you might be interested seeing him in front of the camera. This too adds some minor entertainment but there’s no question that DINOSAUR FROM THE DEEP is at the very bottom of the barrel when it comes to these type of monster movies.