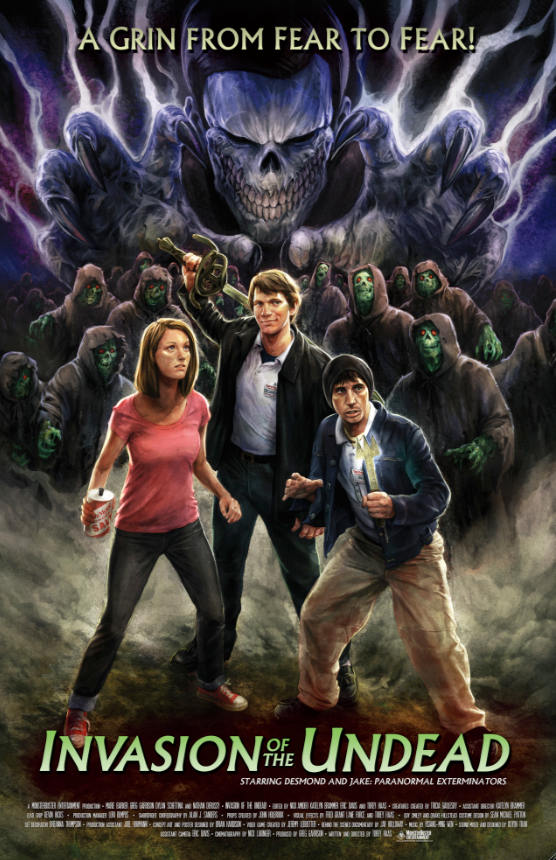 The eye-catching poster and action-packed trailer led me to this one. The plot is pretty simple as a young woman spots a glowing zombie in her bathroom and hires two young guys running a paranormal investigators business. Turns out these aren’t just zombies, but disciples of Z’athax, an intergalactic demon summoned by the girl’s distant relative 100 years earlier. Lensed outside of Atlanta, Georgia, THE NEON DEAD surely doesn’t lack in ambition. Writer-director Torey Haas splashes all kinds of haunted house CREEPSHOW-esque lighting and fills the frames with interesting black-lit demons, zombies and monsters. And thankfully, Haas didn’t do “totally ’80s retro style!!!” or found footage that way too many horror films are doing nowadays. Where it falters is the moments between action scenes. You can definitely tell they are going for a BIG TROUBLE IN LITTLE CHINA sarcastic vibe. Sometimes the comedy works (like one sidekick being a severed head) and sometimes it doesn’t (the lead doing a poor version of Bill Murray’s lascivious Venkman in GHOSTBUSTERS). There are moments of sheer low budget ingenuity (the cosmos where the stop motion monster sends people is well conceived) and moments of sheer low budget blunder (modern trappings shown in a flashback set in 1912). It was still good to see low budget filmmakers actually trying though, even if this is closer to THE VIDEO DEAD than THE EVIL DEAD in terms of classic status. I look forward to seeing what Haas does next.