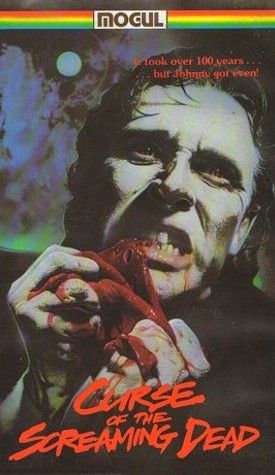 When one sits down to watch a movie with a name such as ‘Curse of the Cannibal Confederates’, it is quite safe to assume that the film that the viewer is about to watch is not exactly Oscar material. However, it doesn’t mean the film cannot be enjoyable and entertaining! ‘Curse of the Cannibal Confederates’ is the Troma re-release of Tony Malanowski’s ‘The Curse of the Screaming Dead’. Rumor has it that ‘Curse of the Screaming Dead’ is actually a sequel/remake to the little-seen 1981 film ‘Night of Horror’ (also directed by Tony Malanowski). No matter, viewing of the so-called “first film” will have no effect on one’s enjoyment or understanding of the film at hand.

‘Curse of the Cannibal Confederates’ opens with a group of rednecks and their respective girlfriends traveling through the backwoods of Maryland on a hunting trip. Upon arrival, our campers decide to search for a new campsite; a change of pace from the years prior. Whilst in search of this new destination, and in between various squabbles amongst the couples, Kiyomi (Mimi Ishikawa) begins to hear strange bells, undetectable to the rest of the group. Her seemingly “macho” boyfriend Mel (Christopher Gummer) wanders off in search of the source of these noises and in the process he discovers a small Confederate burial ground. In the desolate ruins of a church adjacent to the burial ground he finds a strange diary kept by one of Confederate soldiers. Mel steals the diary and alerts the others of the desolate burial ground. Soon, strange events begin to take place surrounding the campers… and the Confederate burial ground.

‘Curse of the Cannibal Confederates’ is the sort of film which is just plain enjoyable to watch. The plot was simple, yet quite good and original. Tony Malanowski took a simple zombie film and added a slight twist to it, including an intriguing motive for the rise of the dead. The main characters were wonderful and each possessed their own unique personality. They all interacted excellently with one another – not to mention the dialogue was hilarious! The makeup and gore effects were very well done and at times, quite disturbing (plenty of gratuitous gore). Despite great characters, great makeup, and an interesting plot, one thing did at times come as a minor nuisance: the lighting problems. In many of the scenes (night scenes especially) it was quite difficult to see what was going on, not to mention the fact that the cinematography wasn’t exactly excellent. Although the lighting and cinematography problems were present, they seemed, as stated earlier, minor. In fact, in a few scenes the lighting gave it quite a vintage/drive-in vibe, which seemed to add some grainy character to this entertaining zombie-romp.

Troma has yet again unearthed another wonderful B-movie on DVD… and a fine release it is. A well-done zombie movie with an original plot and great characters to boot. If you’re looking for a fun time and you’re a fan of low-grade zombie movies, then ‘Curse of the Cannibal Confederates’ is definitely worth your viewing.