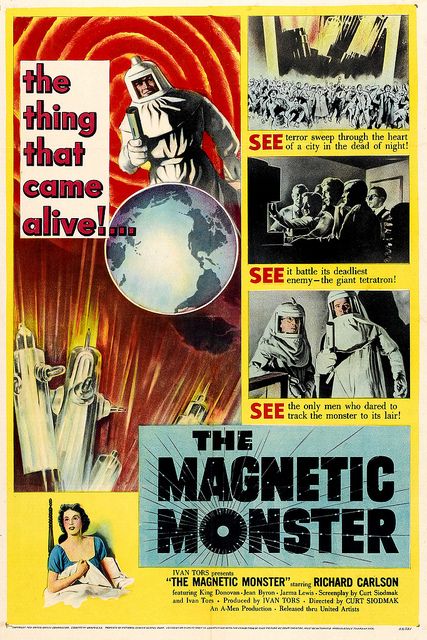 “The Magnetic Monster” was a superior sci-fi B movie of the 1950’s. Rarely seen these days, it hasn’t gotten the appreciation it deserves as an unusual sci-fi classic.

Two scientist-detectives from the Government “Office of Scientific Investigation (O.S.I.)” are sent to investigate some bizarre events, like some guy found dead of radiation poisoning in an apartment building where metal objects have become magnetized. They eventually discover the cause: somewhere there’s a new, accidentally created radioactive isotope with the unique property to “grow” by assimilating surrounding energy into itself. As it grows geometrically, its magnetic field and radioactivity increase too, potentially threatening the very existence of Earth itself. Our heroes race to find and destroy the thing somehow.

For its time, the plot tried hard to be realistic, with realistic-sounding science and a semi-documentary style reminiscent of detective movies. Even a deliberate bit of comic relief as the detectives are initially stymied by false leads. (“Some guy phoned to complain that the battery in his hearing aid burned out and he wants us to look into the matter.” “Oh, fine!”)