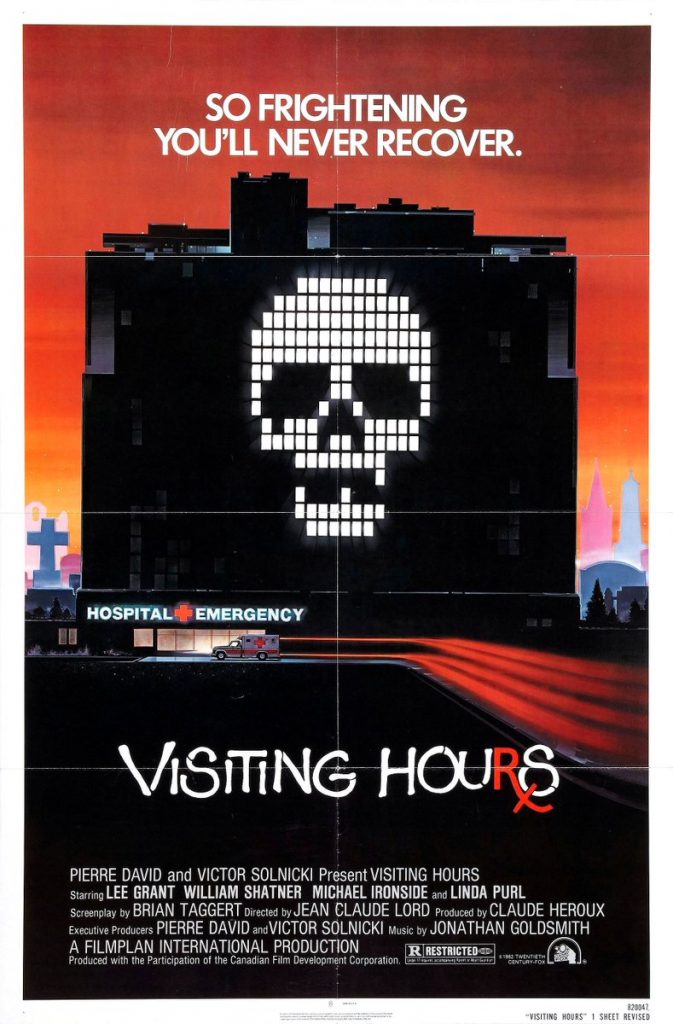 VISITING HOURS is a largely laughed-at serial killer flick starring Michael Ironside. I suppose many of the laughs generate from William Shatner being in the film, playing a concerned boyfriend. I’ve never understood the fixation with Shatner as a comedy figure. Shatner is OK in his role, playing it completely straight and not completely terribly. It seems in getting fixated on the (in my view, non-existent) laughs from Shatner, viewers seem to have a blind spot to a lot of good things that VISITING HOURS achieves.

Ironside is strong as the killer (Colt Hawker), whose desire to kill comes from a terrible childhood and an abusive father. He identifies with his father, and loathes women because his mother threw boiling water over his Pa’s face. Seems a bit of a stretch, but it wouldn’t be the first time sometimes chosen the abuser over the person they abuse.

Colt becomes a misogynist, and turns his attention onto Deborah Ballin, who speaks out against violence towards women. She’s a little militant about it and annoys a few people, so it’s hard for the cops to figure out that Colt is the one hunting her down.

Some of the kill scenes are genuinely affecting. Colt likes to takes pictures of his victims as they’re dying, and one – where he pulls a breathing tube from an elderly lady – is harrowing. Don’t forget that Ironside was great in STARSHIP TROPPERS and brilliant in TOTAL RECALL as the supremely slimy Richter, and he excels in a similar role here. It’s pretty baffling why Ironside ended up in TV series/movie hell given his excellence in playing the bad guy. Just the luck of the draw.

But the main plus of VISITING HOURS is that it’s incredibly well shot. It’s wildly voyeuristic, with lots of uncomfortable close-ups and point-of-view shots… and lots of lingering on people’s suffering. The director – Jean-Claude Lord – has made nothing else of note. Even his name rhymes in a comedic way. Lord started out in France, then ended up doing US TV movies. But VISITING HOURS has a slight Hitchcock vibe and the level of voyeurism that makes you feel a little grubby just watching the damn movie.