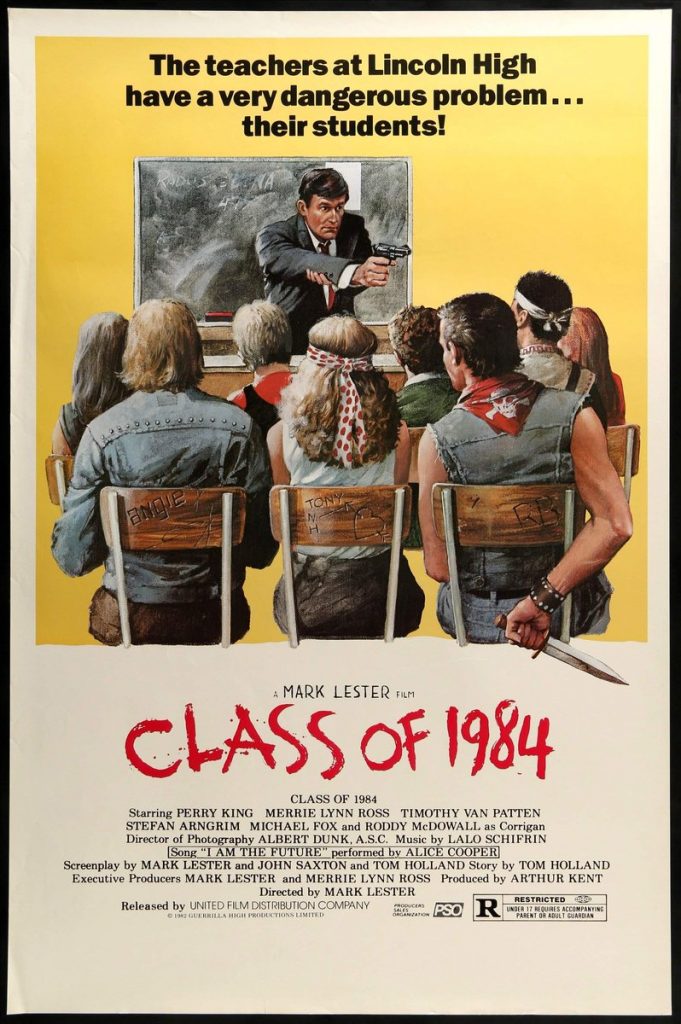 The 1980s were a bit of a let down after the 1970s for exploitation fans, but there were a few gems released alongside the ‘Risky Business’s and ‘Mr.Mom’s. ‘Chained Heat’ and ‘The Exterminator’ immediately spring to mind, and ‘Class Of 1984’ is another. This movie has got it all – a cheesy theme sung by Alice Cooper, a high school terrorized by drug dealing punks, a classic sequence where a square student, high on something or other, decides to salute the flag… at the top of the flagpole… plus a bit with rabbits which I won’t spoil. TV regular Perry King, no stranger to exploitation movies (see ‘Mandingo’), plays a new and idealistic music teacher. He is befriended by another teacher, the cynical secret drinker Roddy McDowall (‘Planet Of The Apes’), who tries to wise him up. Future ‘Sopranos’ writer/director Timothy Van Patten plays Stegman who sells drugs to his classmates, and leads a ruthless gang of hoods. When King tries to break Stegman’s hold on the school he enters into a world of pain. This is a silly but hugely entertaining pile of trash. Be sure to keep an eye out for Michael J. Fox in one of his earliest roles, as a horn playing dweeb. Director Mark Lester eventually made a sequel in name only ‘Class Of 1999’, but it was disappointing and silly sci fi nonsense about robot teachers. I can’t recommend that one but ‘Class Of 1984’ is classic beer’n’pizza material that will be enjoyed by any fans of nasty b-grade exploitation.