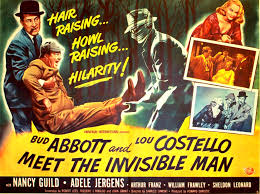 In “Abbott and Costello Meet the Invisible Man”, detectives Bud Alexander (Bud Abbott) and Lou Francis (Lou Costello) have to protect a man framed for murder. This becomes proportionally easier once the man gives himself an invisibility serum. Some of the best scenes are when Lou watches him disappear, when a cop sees (or, rather, doesn’t see) the man driving a car, and even a scene where Lou accidentally puts a bunch of people to sleep. The end scene is also a shocker.

These movies sometimes seem like they were just excuses for everyone to goof off. If so, then they did well. This one was also helped by the fact that it didn’t have any songs, which sometimes weakened A & C’s movies. Really funny.

I guess that I’ll have to see this again, now that I know that Fred Mertz appeared in it.