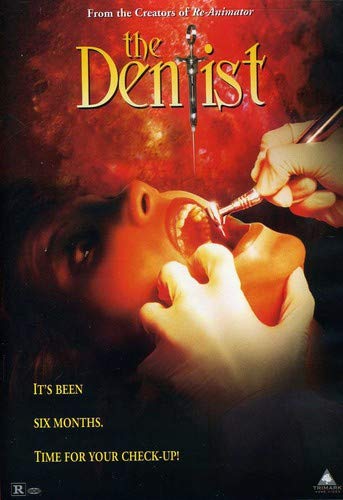 This delightful semi-original and entertaining horror flick from director Brian Yuzna was a welcome change of pace from the usual horror twaddle that was passed out in the late Nineties. Although The Dentist’ is intended to be a cheesy, fun little film, Yuzna ensures that the movie delivers the shocks and thrills that many more serious movies attempt to dispense. Despite suffering somewhat from the lack of background on the central characters, and thus allowing events that should have been built up to take place over a couple of days, the movie is intriguing, generally well scripted and well paced which allows the viewer to maintain interest, even during the more ludicrous of moments. The Dentist’ suffers, on occasion, from dragging but unlike the much inferior 1998 sequel, there are only sporadic uninteresting moments, and in general the movie follows itself nicely.

Corbin Bernsen was very convincing in the role of the sadistic, deranged and perfectionist Dr. Alan Feinstone. The way Bernsen is able to credibly recite his lines, especially with regards to the foulness and immorality of sex (particularly fellatio), is something short of marvellous. While many actors may have trouble portraying a cleanliness obsessed psycho without it coming off as too cheesy or ridiculous, Bernsen seems to truly fit the personality of the character he attempts to portray and thus makes the film all that more enjoyable. Had The Dentist’ not been intended to be a fun, almost comical, horror movie, Bernsen’s performance would probably have been much more powerful. Sadly, the rest of the cast (including a pre-fame Mark Ruffalo) failed to put in very good performances and although the movie was not really damaged by this, stronger performances could have added more credibility to the flick.