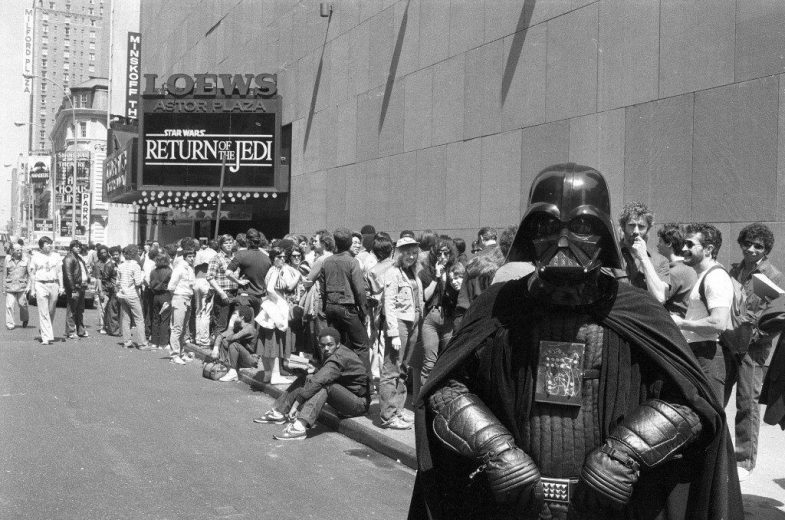 It was mid-June in 1981. I was standing in front of the Palace Theater, a 1,875 seat movie palace that was built in 1921. A line was forming quickly, and I was probably number 60. Down the mall on which the Palace stood, I saw my friends hurry towards the theater. The majority of the people lined up to see the first showing of “Raiders Of The Lost Ark” were young males between 18-24. My friends joined me and by the time the doors opened a line wove down the mall which numbered 1,600. The doors opened, we quickly grabbed medium popcorns, a medium Coke, and of course, I grabbed my box of Good and Plenty, which were a delicious candy snack and a projectile if the occasion afforded.

I sat down mid theater, which was the proper way to see an epic like this. Quickly the audience found its seat, the show was sold out. All 1,875 seats were sold. It looked like about 80 percent of the audience were young males. There was a buzz in the air and excited males chattered like gibbons. The lights lowered, the trailer was shown and we were about to have the wind sucked out of us as Harrison Ford tried to evade a giant stone ball. It was paradise.

The glory days were sitting in a Buick Country Estate Wagon, watching a Galaxina/Pom Pom Girls Double Bill. Wisecracks were intermixed with stale burgers and limp snack bar French fries. Waiting for the second movie to start while sitting on the side of your car, staring into a sky filled with stars and a field of steel encased passion pits was one of the best ways to spend a weekend night. The bugs would gather in front of the projection porthole and smoke enhanced shards of light filled the night sky.

Movie going had an intimacy and a passion back then that is hard to find now. It was an event, a happening, and a cherished form of needed entertainment.

When I turn my head now and look around at my fellow moviegoers, I see a couple of single fathers, three or four older couples, or a group of ladies out on an afternoon jaunt and that’s about it. What I do not see is any young males. The demographic which saw the rise of the blockbuster were for the most part absent. I was haunted by this. They do show up at a Marvel movie, but not with any regularity. The idea of movie going is foreign to these folks. This erosion of movie going I believe is a key element behind the struggles that the theaters are now facing.

As I type these weekly unrequited essays, I often hear my 18 year old son chatter wildly as he plays Call Of Duty, Fortnite, or League of Legends on his XBOX. I recognize this inane style of conversation. As I strained to listen, the memories of my male youth come rushing back in a torrent. The audience that consumed massive amounts of concessions, the fellow movie goers, the excitement, and the anticipation is now captured by a video game console. What was fascinating is that while they were playing the games, my son and his friend were singing “Cigarette Daydreams” by Cage The Elephant. Now if we did that during the showing of “Raiders” I would have been shown the door.

The people who produce these games have captured the arcane nature of Roger Corman, the exploitation of Samuel Z .Arkoff, and thrown in for good measure Crown International. The video games of today are the spiritual descendants of movies like “Dawn Of the Dead”, “Night Of the Comet”, “Death Race 2000”, and a personal favorite, “Chopping Mall”. That realization hit me across the head like a Louisville Slugger bat.

The sense of community which has been built up around video gaming has become huge. Today there are 2.7 billion gamers in the world. This year games will bring in $159.5 billion smackers. By 2023, $200 billion. The global box office for movies in 2019 was $42 billion, the less said about 2020 the better. I know when I ran a small test on the Boardwalk of Atlantic City, for every $5 these gamers spent on gameplay, they spent another $16 on concessions. We need to get this demographic back into the theaters.

While Hollywood plays cornhole with the theaters, and I am not talking about that game where you toss floppy bags into a board filled with holes, there is a giant community floating out in the digital ether who could enjoy a nice comfy theater in which to play. All while speed balling Mountain Dews, consuming yards of Red Vines, and the more intelligent ones eating buckets of Good and Plenty’s, nature’s most perfect candy.

We need to attract this demographic back by offering to support their favorite pastime, then we sell them mountains of concessions, then re-introduce them to the glory that is movies. Play a video game, see a movie about a Giant Pickle that nibbles on Cedar Rapids, play another video game, eat some more concessions then call it a day.

We need to include gaming in the product offerings put forward in theaters. We need to diversify and we desperately need to reconnect with this demographic. Right now most of their gaming is done at home or in dark little shops located in strip malls called Lan Centers. If a concerted effort to engage with gamers is made then we can begin to rebuild the theater-going base.

I have some ideas about where to start if anyone is interested.

Right now I am heading downstairs to force my son to watch “Pom Pom Girls”.