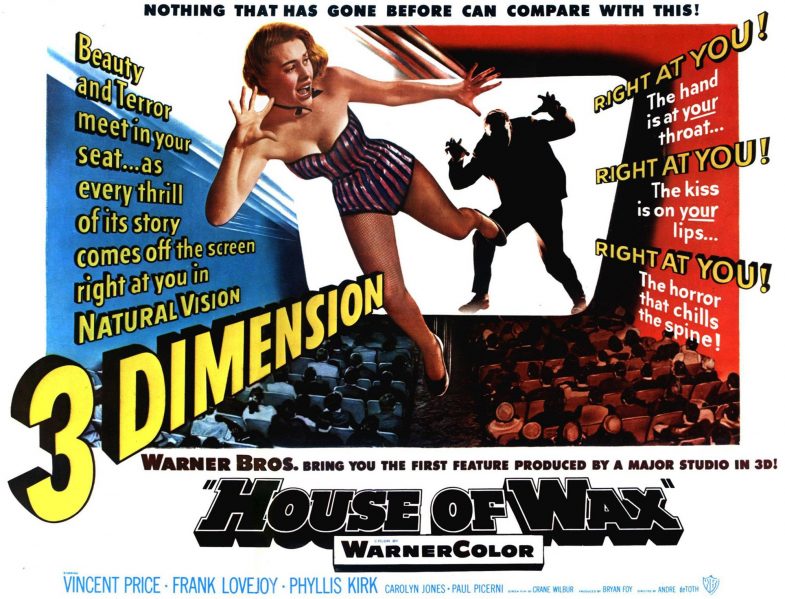 ‘House Of Wax’ is an important movie in Vincent Price’s career, because it was his first legitimate horror film, after thirty something pictures in a variety of genres. This really is where the Price persona fans know and love began. He made non-horror pictures after this, it was a few years later that he made ‘The Fly’ and the William Castle movies which made him a horror star, something cemented later in the 60s with Roger Corman’s Poe movies. But you can see Vincent Price horror icon right here. He’s terrific as Jarrod and he would draw upon this role for ‘The Mad Magician’, and later, the Phibes movies and ‘Theatre Of Blood’. ‘House Of Wax’ is a remake of ‘Mystery Of The Wax Museum’ made twenty years earlier. In that one Lionel Atwill played the Price role (different name, but same character). Atwill was great but Price is even better, as is the movie overall. ‘House Of Wax’ sticks pretty much to the earlier movie, but with a few changes, most notably the absence of the girl reporter character that Fay Wray played in the original. In this, the policeman played by Frank Lovejoy (‘In A Lonely Place’) takes on a similar role. Phyllis Kirk is good as the female lead, better in my opinion than Glenda Farrell in the earlier picture. The supporting cast also includes Carolyn “Morticia Addams” Jones, and an early appearance by Charles Bronson, who plays a deaf mute named Igor. ‘House Of Wax’ was made specifically for 3D, so there’s a few gimmicky shots, but that doesn’t spoil the movie, which to me is a horror classic that every fan of the genre should see.