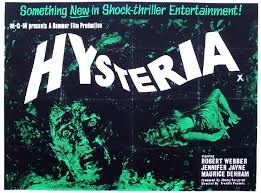 From the long line of Hammer Thrillers with one word titles that followed in the wake of Psycho, Hysteria is a decent addition to the roster. Plot in simple terms finds Webber as Chris Smith, a survivor of a car crash who is suffering with amnesia. Upon finding out some mysterious benefactor has been footing the hospital bills for him, he is naturally intrigued as to who it is. Following the bare minimum of clues, while struggling with angry voices he hears in his head, Smith finds himself in a vortex of mystery and shifty shenanigans.

What follows is a monochrome murder mystery laced with psychopathic tendencies, paranoia, dangerous attractions, twists and extended flashbacks. It’s all a bit flimsy if you wanted to dissect it as a viable story, but Sangster comes up with some good ideas in the name of entertainment, and Francis is able to eek out suspense at regular intervals. Cast are fine, including the sometimes maligned Webber who sits the role well, while Denham offers up a good one as the detective who is not to be taken lightly.