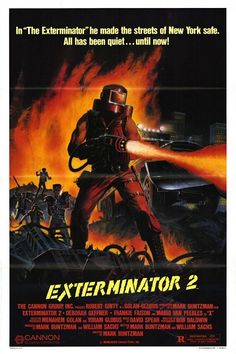 “Exterminator 2” brings back the great Robert Ginty as flamethrower wielding vigilante John Eastland, but has nowhere near the impact as the first film. That’s not to say that it’s not enjoyable, but overall it’s silly stuff.

Directed by Mark Buntzman, who produced the first film, it sees Eastland start to date an exotic dancer named Caroline (Deborah Geffner) and make friends with an outgoing garbageman named Be Gee (the excellent veteran character actor Frankie Faison). Eastland agrees to take on a job as a garbageman (!), but finds his happiness threatened by the activities of a street gang led by the fiendish “X” (Mario Van Peebles, in a breakthrough role). Of course, Eastland has already been up to his old tricks by torching various criminal scum, but is he going to be ready for this particularly sadistic gang?

The viewer can have an interesting time checking out the early appearances by actors who would go on to become busy and recognizable if not famous: Irwin Keyes, Arye Gross, Thomas Calabro, and John Turturro, who has a bit. The gang members basically come across as cartoons and there’s a certain goofy quality to a lot of the dialogue, performances, and situations. (If nothing else, the audience may find “Exterminator 2” laughable enough to be entertaining.) The music is also particularly amusing, providing the perfect accompaniment for assorted violent goings on. Ginty is reasonably engaging although his character of Eastland was a more compelling individual the first time. Faison is superb and shows off a natural charisma. And Van Peebles makes the most of his demented & depraved role, making for a pretty good antagonist.

Especially entertaining is seeing Ginty turn Faisons’ garbage truck into an assault vehicle and watching the final cat-and-mouse chase between hero and villain. There’s plenty of characters going up like Roman candles to keep the viewers interested.

All in all, this is decent enough, and it might be worth watching it along with, say, “Death Wish II” and/or “Death Wish 3” for a dose of vigilante vs. gang escapism.