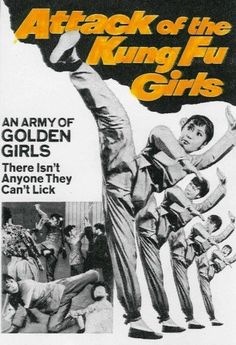 Director Lo Wei was obviously attempting to duplicate his success of “Fist of Fury (The Chinese Connection)” but with a female heroine, as this film contains several situation elements and cast members similar to that earlier film, plus the same martial arts director. By any standard, this is clearly one of the half-dozen best female kung-fu films of the 70’s. The story takes place in China during World War II, with the heroine battling unarmed against Japanese and collaborators. If you have only seen Cheng Pei-Pei in her villainous role as Jade Fox in “Crouching Tiger, Hidden Dragon”, you should see what she was like 30 years ago as a heroine! And as a bonus, she even gets to beat up Jackie Chan (who plays a Japanese villain). Whether you like this movie or not will depend on whether you like female kung-fu heroines.