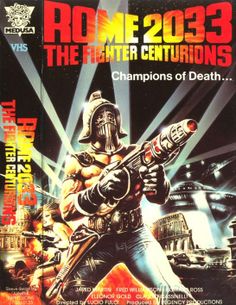 During his career , Fulci contributed to many different genres. It is a bid sad that he is remembered only for his gore movies, though they are classics.

But Fulci making a sci-fi movie still sounded like a disaster, especially given the low budgets with which Fulci worked during the period when he made “New gladiators”. Nevertheless, I was quite pleased with the result. Clearly, one cannot call the movie a good movie. For this, it is far too uneven: It has a fairly good opening, but step by step degrades into plain silliness culminating into Drake swallowing a device which allows him to manipulate all electronic equipment and even melt metal walls. At the end, the movie resumes pace again for a rather satisfying ending.

As often noted, even by Fulci’s daughter Antonella, the “New gladiators” is highly reminiscent of “Rollerball” and of other classic American sci-fi-movies such as “Logan’s run”. Fulci manages to use some of his trademark elements to enhance the familiar motives: First, there is the overall dark atmosphere of the movie. Second, there are some almost surreal sequences such as the killing of Drake’s wife. Third, there is the juxtapposition of antique and future Rome. At this point, I would like to mention that the often criticized toy models are filmed quite effectively and help to create an illusion, though not a perfect one. Fulci and the scriptwriters get an extra credit for managing to incorporate a throat slashing with Poe’s pendulum into this movie!

All in all, “New Gladiators” is a slightly messed up movie with interesting details to keep you amused. As such, it is much more entertaining than recent Hollywood big budget sci-fis which feature even less story and more silly plot elements than the worst Fulci movie and are completely brainless.