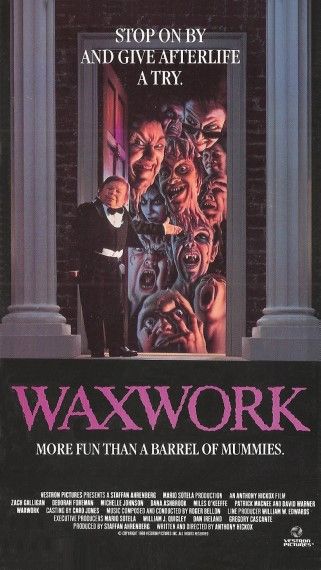 Pretty fun horror movie! It’s not the newest idea in the world: there’d been a German silent horror anthology movie set in a Waxwork. In that, a man is hired to write stories about some of the characters in the wax museum. In each segment, we see the story played out, and the author, the owner and his daughter appear in the segments as well. In the last segment, they’re menaced by Springheel Jack.

In this film, a Waxwork appears in what seems to be a residential neighborhood – strange place to try to do business. It is filled with various death scenes involving werewolves, vampires, zombies, mummies, and so on. Some characters we don’t see too much of seem to include the Invisible Man, Jack the Ripper. A group of young people are invited to a party at the Waxwork, and some of them step onto the displays, and find themselves transported into a live action scene where their lives are in danger.