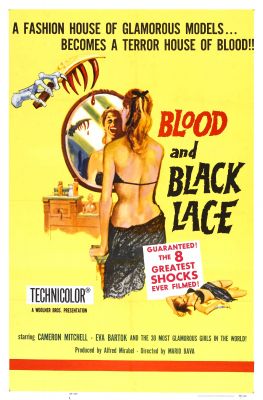 Bava of course is the ultimate auteur whose mysterious visual style alone makes pretty much any of his movies worth watching. Here however there is a bit of a tug-of-war between his desire to materialize victims’ fears in delirious murder sequences (especially in the antique store), magically colored with his amazing lighting techniques, with rather pedestrian cops-and-robbers sequences that are a bit stilted and have a 1940s aura about them. Bava is undoubtedly at his best in pure horror, when he can leave the real world behind. Still, though, his mythological spaces in this film, a fashion salon, amazingly baroque apartments, create a dream-like anything can happen atmosphere. And he’s not just being scenic. Bava has a keen eye for the aura of intimacy that women create about themselves and when that space is violated and especially when the murderer strikes, and then gets rough with their dead bodies, one feels the violation viscerally. Bava works so hard to decorate the aura of women with all the curtains, statues, dresses , mannequins (somehow commenting on the proceedings) and engaging close-ups, that when his victims are shown dead with their bras on, it seems more shocking than the hundreds of nude corpses in the slasher movies in years to come (he’s often credited with creating the slasher, maybe formally, but not in tone). In fact, the best setpiece in the movie features a dead women in her bra with a suit of armor fallen on top of her, a bizarre tableaux with hint of necrophilia. In spite of his stylistics, Bava doesn’t wander off plot, which turns out to be carefully revealed, and with a twist. Cameron Mitchell is quite good. Obviously, all of Bava should be watched, including this one.