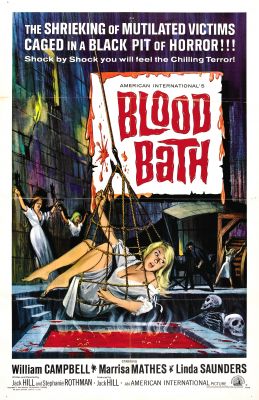 1966’s “Track of the Vampire” was first released theatrically at 62 minutes, under the title “Blood Bath,” but this review will be of the full 78 minute version issued to television. William Campbell stars as Antonio Sordi, an artist lauded for his paintings of dead nudes, who believes himself to be the reincarnation of an artist ancestor burned at the stake for sorcery after being exposed by his latest model, Miliza, who believed her soul had been captured on canvas. Sordi keeps a portrait of Miliza in his studio, and cannot make love to his newest muse Dorean (Lori Saunders) because of her close resemblance to it. All the new scenes with Campbell were filmed by director Jack Hill, maintaining the name he used in “Portrait in Terror,” but whenever the character becomes a blonde haired vampire sporting tiny fangs (!), a different actor was cast by new director Stephanie Rothman, resulting in sporadic chase sequences and a ballet lasting more than 3 minutes. Just over 9 (out of 81) minutes of footage from “Portrait in Terror” were used, recasting an unbilled Patrick Magee as a jealous husband (the exotic dancer now becoming his wife) who winds up covered in wax, like all of Sordi’s female victims (the shared sequence between Campbell and Magee has completely new dialogue badly overdubbed). Apparently, he kills them first, paints their nude likenesses, then covers each corpse in wax. Campbell himself doesn’t make his first appearance until 22 minutes in, the vampire having already worn out its welcome with a 6 1/2 minute pursuit of a young lass who ends up in the ocean minus most of her clothes, while a middleweight Tor Johnson lookalike acts as temporary lifeguard. The ending didn’t make any sense, but probably made the film. Stephanie Rothman did all the vampire stuff, including the subplot featuring Sandra Knight, all of which is self contained (only a single dissolve fuses the artist and the vampire, pretty lame). Jack Hill did all the beatnik scenes, plus the bizarre climax, filming in Venice California. I’d say each director was split fairly even, sharing writing and directing credits, but never working in tandem (the uncredited Roger Corman replaced Hill with Rothman).