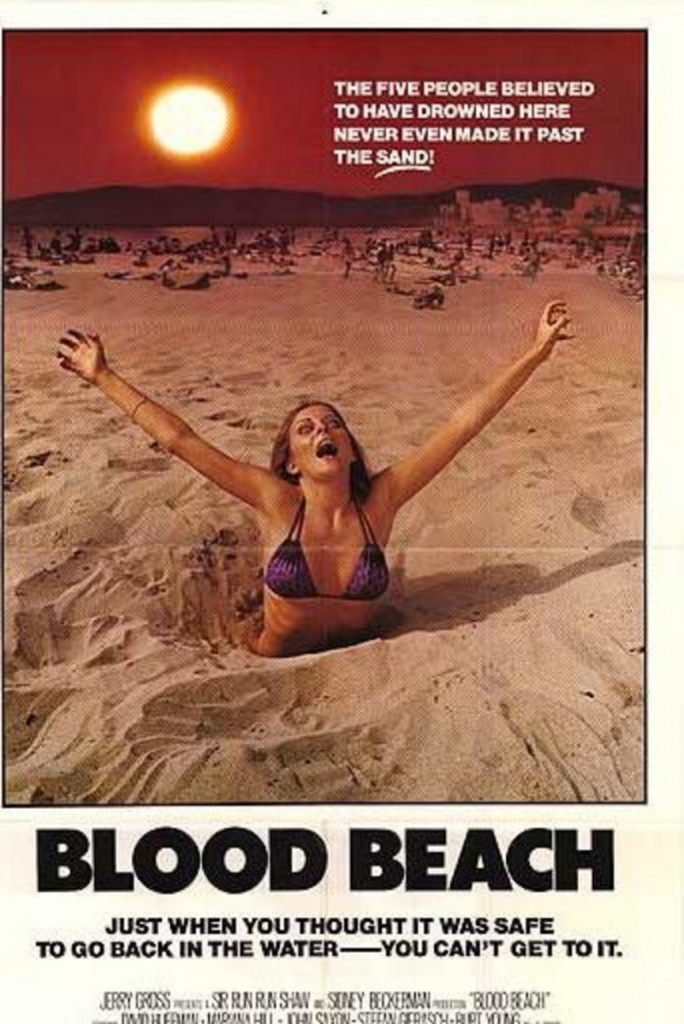 After several people mysteriously vanish from a South Californian beach, authorities begin the search for whoever or whatever is responsible. Believing some kind of ravenous subterranean creature to be the cause of the disappearances, harbour patrolman Harry (David Huffman) and ex-girlfriend Catherine (Marianna Hill) begin looking for the beast’s lair.

The cleverest thing about this predictable early 80s monster movie is surely it’s amusing, Jaws-inspired tag-line ‘Just when you thought it was safe to go back in the water – you can’t get to it.’; but even though Blood Beach displays very little else in the way of originality, rarely rising above routine B-movie fodder, there’s just about enough fun to be had with it to still make it worth your while.

Huffman and Hill are forgettably bland, but the presence of seasoned character actors John Saxon and Burt Young more than compensate for the lacklustre leads, both guys giving enjoyable performances, Young as an uncouth copper from Chicago with zero tact, and Saxon as his tough but fair superior. Also worthy of mention is the lovely Lena Pousette, who shines as Marie, Harry’s sexy blond air-hostess ‘friend with benefits’.

The film also features several well executed deaths scenes, victims swallowed up by the sand in convincing fashion, and there’s some fun to be had with the gore, including a would-be rapist having his junk chewed off by the monster and a cascade of dismembered body parts tumbling onto the unfortunate Catherine. Blood Beach’s jump scares are about as clichéd as they can get (eg. a screeching cat leaping into frame) but they are still effective. Sadly, the monster is only revealed in the film’s closing moments, and isn’t all that impressive, looking like a giant papier-mâché plant (quite how that thing burrows underground, I’ll never know!).

In an ending typical of 70s/80s monster movies, the creature is blown to pieces, but as the closing credits roll, new activity under the sand suggests that the horror isn’t over yet (although a sequel has yet to surface).