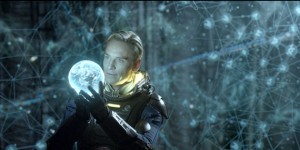 “ITS STRUCTURAL PERFECTION is matched only by its hostility,” says Ian Holm in 1979’s Alien. “I admire its purity.”

True, he’s talking about a soulless, vicious alien, but what he says applies just as well to Alien. A perfect film, it’s a sci-fi B-movie made with A-list skill; despite budget woes and the risk of casting an unknown, untested actress as the film’s lead, a young British director named Ridley Scott made one of our scariest, smartest films. Beautiful, horrifying, and masterfully shot and edited, Alien remains an uncut dose of nightmare fuel. Scott went on to further explore his grim vision of the future in 1982’s Blade Runner; since then, Alien sequels have come and gone, none involving Scott. Hell, after Blade Runner, Scott moved on entirely—in two films, he reinvented science-fiction, then never returned to it.

Until now, that is, with Prometheus—a prequel to Alien, Scott’s return to science fiction, and, on both counts, a disappointment.

Written by Jon Spaihts and Damon Lindelof, Prometheus’ script echoes Alien’s in a lot of ways; some are creative, most aren’t. The biggest differences are the films’ aims: While Alien followed blue-collar workers merely trying to survive, those onboard the Prometheus tackle what one character humbly proclaims to be “the most meaningful questions ever asked by mankind.” The scale is epic, the stakes are huge, and big questions are raised. But the answers are hollow, uninspired, and silly; the anxious horror that slicked every frame of Alien is replaced with flashy spectacle and clunky exposition; the story crumbles apart the longer one thinks about it.

Which isn’t to say it’s a total loss: Prometheus is gorgeous to look at and listen to, thanks to Scott’s remarkable eye and music by Marc Streitenfeld and Harry Gregson-Williams; boil it down to nothing but aesthetics and the film has a haunting, bleakly majestic mood. Theron’s excellent, and Fassbender’s phenomenal—had Vickers and David been the focal points rather than the dull Shaw, Prometheus’ narrative might’ve stood a chance. And two terrifying sequences—one involving a penis eel sliding from black muck, another a stomach-churning scene that I’m not even going to try to describe—prove Scott hasn’t lost his touch when it comes to horror.

What he does seem to have lost touch with is the purity that made Alien remarkable—in clumsily attempting to do so much more, Prometheus accomplishes far less. Ending on all but a cliffhanger, Prometheus hints that Scott wants to say more in a sequel. If he gets the chance, here’s hoping he comes up with something worth saying.