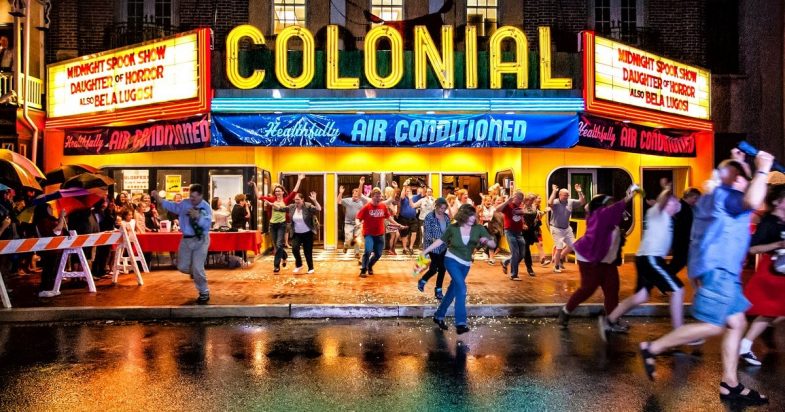 nce Hollywood began to understand that the image of America was a global commodity, they consistently attempted to package it. Initially, they took the inspiration naturally and conveyed it honestly but soon Hollywood began to twist the vision of Americans to their own perception of what could sell. The market shifted and they lost a perspective of what America was and started to focus on appealing to a vanilla skewed audience that was neither American, European, or Chinese. They lost their way and the stories they were telling began to lose their luster. At one time Hollywood served as a cultural interpreter but now was adrift after having firmly lost the grip of their once healthy audience.

To Thine Own Self Be True, is a phrase that both my grandmother and my mother were more than fond of repeatedly saying. When I was about to become a father, my Dad gave me the firm advice that all you really could give a child was your true self. This is something that both America and Hollywood seem to have lost.

I ask myself consistently where the vision for this country has gone. At the same time ask where the moral leadership has gone. When I was growing up, America was a beacon for innovation, excitement, and cultural export. Today this entertainment culture is mired in a foul stew of Kardashians, Reality TV, and Social Media, where cowardice and false bravado reign supreme. I ask myself where is the spark that can re-ignite the self-resolved perception of America that engaged the world. I looked around and was surprised to find it in the most unlikely of places.

Outside of the silicon engorged entertainment emanating out of Southern California and on the opposite side of the country lies an Oasis of truthful Americana and whispers of what once was and at one time heralded, a time before when America’s heroes became the manipulators of Wall Street, corporatism began to overtake the economy much like kudzu takes over the side of the roads in Georgia and faith was eroded by moving away from an individual responsibility to God and the assumption of a materialistic gospel. There lies a nugget embedded on the Jersey shore, a glimpse of pure American fun and culture, a mirrored reflection of the truth in the American spirit; Wildwood, New Jersey.

For me, this town is like truth on a stick filled with Art Deco motels, and a boardwalk that oozes free enterprise. Pizza joints that have been in the family for generations, cheesesteaks that have value and with a preparation that is done by hand and a glacier worth of Italian and Polish Ices. Morey’s piers stand and juts out into a vast expanse of sand offering family fun from roller coasters to a waterpark that provides deep relief in the sizzling hot August of an East Coast summer. It is free enterprise at its best.

An argument can be made that Wildwood gave birth to that purest of American art forms “Rock and Roll”. In 1954, the legendary Bill Haley aided by his pals, The Comets, launched their single “Rock Around the Clock” from the stage of the Hof Brau Hotel and the innovative Chubby Checker introducing his hit “The Twist” at the Rainbow Club in 1960. American Bandstand also made summertime appearances in Wildwood, first in 1956 by its founder, a Philadelphia based radio disc jockey, Bob Horn, and in 1957 taken over by the man who turned the show into a nationwide craze, Dick Clark, as it aired live from the Wildwood’s Starlight Ballroom on national television.

DooWop, the syncopated street music took shape under the lights of the Wildwood boardwalk, incubating in the womb of Wildwood and then taking every street corner in Philadelphia by storm. Doo-Wop was so ingrained in the culture of Wildwood that the architectural style that took hold in the ’50s and the 60s was dubbed “DooWop” architecture.

In the summer of 1963, singer Bobby Rydell (Robert Ridarelli) released “Wildwood Days”. It eventually became the official anthem of Wildwood as it was blared out up and down the boardwalk. Rydell’s version spent 9 weeks on the Billboard Hot 100 chart, peaking at No. 17, while reaching No. 14 in Australia, and No. 21 on Canada’s CHUM Hit Parade. In 1966, Canadian teen idol Bobby Curtola (his real name) released a version of the song, which reached No. 36 on Canada’s “RPM 100”.

The thing that hits me is the simple fact that Wildwood emanates a truth as a result of reacting to the audience it serves. The town which year-round has a population of 5300 can swell in the summer months to 250,000. The boardwalk is an expression of the people it serves. The vision that has shaped this piece of true Americana is built upon what its audience wants and nothing else. There is no appeal to the foreign market (except for French Canadians), no trying to be something they are not. While cities like Atlantic City are crumbling under the pretense of overblown conception, Wildwood has remained true to itself. And that, at the end of the day is the secret to its success.

I love Wildwood for two reasons; it’s true and it’s American. There is something compelling with something that gives you both honesty and a truthful experience. There is nothing like it.

With the theatrical windows being shattered, a deep vacuum of leadership within the business of exhibition making itself evident, the marauding effect of a pandemic and corporatism out of control, I would have to make the statement that exhibition is as we knew it, is gone forever. When industry association come out in favor of a plan to go day and date, for me that organization loses all relevancy. These are strange times, and it is time to go back to the roots of exhibition and start to rebuild.

Man, do I want a cheesesteak and a Polish Ice right now. Happy Thanksgiving everyone.