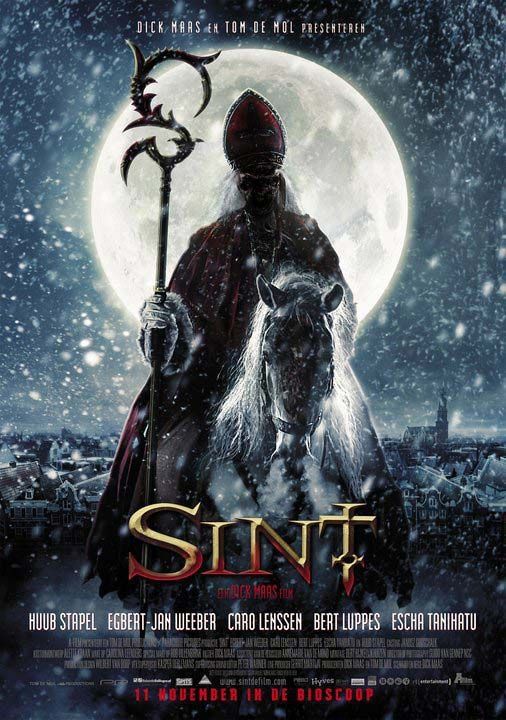 Sint Niklaas, or “Sinterklaas”, is a typically Dutch and Belgian tradition that occurs every year on the 5th and 6th of December. The legend states that, on his own birthday, the noble Saint rewards all the well-behaving children with toys and candy. When the children are asleep, the heavily bearded man walks over the rooftops on his white horse while his black assistants drop the presents down the chimneys. Does that sound vaguely familiar? Well actually, Sint Niklaas formed the inspiration for the universally acknowledged jolly figure of Santa Clause. The first Dutch immigrants in the United Stated re-implemented their national tradition oversees and linked it to the Christmas period. There, now all you non-Dutch speaking people with an interest in this film have some essential, need-to-know trivia about the titular character.

About the plot of “Sint” I can be rather brief. You know all the concept of US horror movies with a psychopathic Santa Clause, like for example “Silent Night Deadly Night”, “You Better Watch Out” and “Santa Slay”. Well, “Sint” is exactly the same. Writer/director Dick Maas (the only true horror prodigy of The Netherlands) wants to make us believe that Saint Niklaas wasn’t a holy and generous figure, but a sadistic tyrant who plundered villages and terrorized the inhabitants. In the year 1492 on the fifth of December, he was burned alive by an angry mob. Even still now whenever there’s a full moon on the anniversary of his violent death, which apparently occurs, once every 32 years, the evil saint returns to Amsterdam to butcher as many adults and children as possible.

“Sint” should be experienced exactly like Dick Maas intended it: as a highly amusing and deeply satirical splatter flick! Everything about it is wondrously grotesque and over-the-top; the whole basic idea, the acting performances and (especially) the dialogs. The gory massacres, including those of innocent young children, are so tremendously bombastic that you simply cannot be shocked or offended by them. At least not if you have a slight sense of dark humor. The special effects and make-up are graphic and engrossing, but too obviously fake. Naturally there’s isn’t much room for genuine suspense in this type of story, but – as said – that clearly wasn’t the director’s intention and at least he widely compensates this small shortcoming with fast-paced action and black comedy.

The film became infamous and caused quite some controversy in The Netherlands long before its premiere in theaters because promotional film posters, depicting the mutilated Sint on his menacing horse, were hung in public areas out there for young kids to see. Quite a number of sour and prudish people were upset about this, but plenty of questionnaires proved that the children themselves weren’t shocked at all. For Dick Maas, the whole controversy just turned out to be more than welcome and cost-free publicity. Well done.