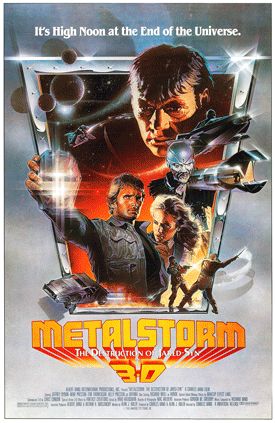 Director Charles Band followed up PARASITE, his first successful foray into the 3-D world, with this futuristic action-adventure film. It is pretty obvious he is going for a mix of THE ROAD WARRIOR and STAR WARS, but I’m not entirely sure it is successful and at times comes off looking more like MEGAFORCE. The action is good though and the film moves at a quick clip. I’m sure the 3-D was pretty impressive in the theater as all sorts of objects are chucked at the screen. There is also one psychedelic, TRON-inspired bit during the end chase that probably had audiences puking dayglo in the aisles. The acting is good though for a b-movie with Thomerson doing his best Han Solo and Richard Moll showing up as a leader of a group of Cyclops. The film “ends” with the most laughable cliffhanger where Jared-Syn gets away (so the title lied!) and Dogen vows, “I’ll find him in another dimension one day.” Huh? Obviously Band was hoping this would be a series but poor box office returns from a Universal theatrical distribution vetoed that idea and he moved on to start Empire Pictures (which kicked off production with THE DUNGEONMASTER, again starring Byron). Now if only someone could tell me what the hell METALSTORM means.