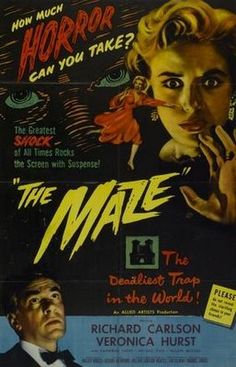 A woman and her aunt go to Scotland to locate her evasive fiancé. This is a much-maligned film because of its denouement, but up to that point, it’s interesting, well-acted, eerie, and with fine set design (by William Cameron Menzies, developed for 3-D projection). Veronica Hurst is captivating and genteel, sort of a chic British Marilyn Monroe, still in love with Richard Carlson, who is hiding a family secret in his forbidding castle; there are even bats in the belfry! It moves leisurely until the final extraordinary set-piece, when Hurst and her aunt (Katherine Emery, also the narrator), sneak out of the castle in the night to venture into the maze (pre – “The Shining” – 1980) and find what they’re looking for in its center. As a kid, I always remembered this sequence – there’s nothing scarier (or claustrophobic) than not finding your way out of a 10-foot high maze of hedges. Naturally, the two women get separated, setting the stage for engrossing suspense with horrific music. The final result is mildly disappointing really, since Carlson’s epilogue {a “Psycho” (1960) style postscript} makes some sense to all the goings-on, even provoking sympathy. Worth seeing.