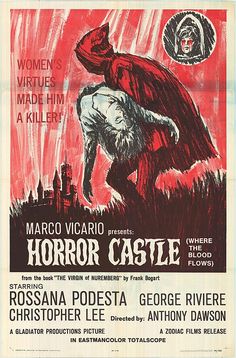 This film by Antonio Margheriti certainly tells one of the most unusual stories ever told in a Gothic horror movie. Margheriti directed it through and through Gothic – the old, creepy castle, thunderstorms, secret passage ways, skulls piled up, medieval torture devices and so forth – but the story takes place in the presence.

The Bavarian town of Nuremberg made headlines after World War II: The biggest process against Nazi leaders was held there. So it’s no surprise that the motive for the happenings in the film “La Vergine di Norimberga” directly rely on Nazi war atrocities – and to combine Gothic horror with the darkest chapter of German history is undoubtedly unique (the German version, however, censored the whole Nazi subplot and made the killer’s motive much simpler – avoid this version at all costs). This combination may sound odd, but it works in this film perfectly and gives it also a “no war ever again”-statement that I fully support (but if one watches how many wars are always going on in all different places on earth, one really wonders if mankind has learned of the past war atrocities including WWII).

Christopher Lee gives another supporting role to remember, and Riz Ortolani’s score is bombastic, but fits the Gothic atmosphere of the picture. There are some surprisingly gory moments in the film (concerning it was made in 1963), but they never make the impression of being gratuitous or senseless. I highly recommend this film not only to fans of the genre.