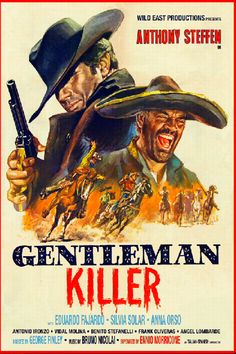 A Spanish-Italian co-production full of action , exaggerated characters , shootouts and lots of violence . A good example of Latino western genre mostly filmed in Spain . This is a co-production Spanish-Italian with a varied cast formed by actors of diverse countries . This meaty Western contains interesting plot , violence , shoot’em up and is quite entertaining , though drags at times , balancing in ups and downs . This moving Spaghetti packs noisy action , thrills , drama with surprising final . For money, for pleasure, for revenge, he doesn’t care why he kills or how . Gentleman Jo ( Anthony Steffen) a cocky and brilliantly dressed card-player arrives in a little town called Douglas dominated by villain Ferreras ( Eduardo Fajardo ) and his underlings (Benito Stefanelli , Jose Guardiola , Luis Barboo) . The townspeople implore the only remaining cavalry , Captain Reed ( Mariano Vidal Molina) , to protect them from the Mexican outlaws . Reed warns both sides that he is still in command until to solve the dispute about Douglas town if it belongs Mexican territory , either US nation . Then card-shaper Jo hears his brother the Union captain Clay Reeves ( Mariano Vidal Molina ) was murdered by Ferreras’ hoodlums . Knowning his brother has been killed he heads to encounter his brother’s assassin. Jo goes out to avenge his brother battling murderous and executes a single-handedly revenge , as he slashes , shoots, ravage and kills each person involved in the killing . As Jo seeks vengeance against Ferreras and is only helped by a Saloon-girl ( Silvia Solar ) who is caught and hung . While the Ferreras’ hoodlums kill , mistreat and harass townspeople . Gentleman Jo is trapped and receives violent punches, kicks , and is ultimately set in firing squad .

Offbeat Chorizo-Spaghetti Western co-produced by Spain and Italy and follows the Sergio Leone wake and it is proceeded in violent style . The film packs violence , shootouts , high body-count and it’s fast moving and quite entertaining . It’s a thrilling western with breathtaking confrontation between the protagonist Anthony Steffen against the heartless Eduardo Fajardo and his underlings . Anthony Steffen is fine, he ravages the screen , hit and run and kills but is finally detained and strongly tortured . This movie is a lot of fun to watch. It’s an acceptable story with a touch of peculiarity, some particular characters, and an amazing music score . The picture is a tale of justice and revenge, as a man returns home , a border little town and looks for vendetta against the brother’s killers. The basic plot is typical spaghetti western fare, but what makes this movie stand out is its style . This is an exciting film, plenty action , thrills, fights , gun-down and breathtaking outdoors from Spain and interior filmed in Elios Studios, Rome , Italy . Acceptable action sequences with rousing attacks and spectacularly realistic shootouts. Charismatic performance for whole casting . The notorious Spaghetti actor , Anthony Steffen is good in his usual tough role . Fantastic performance by the always great Eduardo Fajardo as the slimy, menacing outlaw make up for , here in his ordinary role as bandit and in a cruelly baddie character , he is terrific, and bears a hysterical and mocking aspect , subsequently he would play similar characters . Appears as secondaries the habitual in Spanish/Italian Western such as Benito Stefanelli , Jose Guardiola , Luis Barboo, and many others.