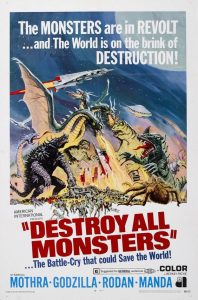 Toho decided to throw a block party for monsters in Tokyo, and invited every creature they could get to sign on to do the flick. Their three biggest mega stars are featured: the lovable giant fire-breathing lizard Godzilla, the supersonic bird who stirs up hurricane winds, Rodan; and the evil three-headed serpent King Ghidora. Throw in the talents of several other monsters and you have a Battle Royale that’s a feast for the eyes.

Aliens want to conquer the Earth. So they use hypnosis chips on both key humans as well as the giant beasts, forcing them to assist in a sinister scheme. The human actors, although intentionally upstaged by their larger co-stars, make for an interesting invasion from within story. The actors really do a good job showing urgency in this battle for Earth, (in spite of the sometimes questionable dubbing job). The action moves fast and furious, leading to the inevitable climactic monster showdown.

The film incorporates the monster back stories as much as possible; considering how many creatures get in the act, that’s quite an accomplishment. It’s fun to see them all together; and they put on several good destruction and battle scenes. The TV reporter doing a sports play-by-play in the decisive battle is a great touch, giving us great lines such as, “Listen to the monsters, with their cries of horror and sudden death!”