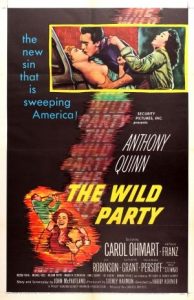 This lurid hostage melodrama with sexual overtones must have seemed pretty hot stuff back in 1956 (in fact it was as the UK censors initially refused it a certificate until it was subsequently cut for the most prohibitive X certificate), but like other delinquency dramas of the time BLACKBOARD JUNGLE and THE WILD ONE time has softened many of its harsher elements even if it hasn’t quite smoothed of all of its rough edges. Beatnik pianist Kicks Johnson (Nehemiah Persoff  yeah, right!) tells us a cautionary tale from the previous year when he was part of the extended rootless network of broken- down ex-football star Tom Kupfen (Anthony Quinn)  the “wild party” of the title who was in desperate need of quick cash  as well as the easily influenced wayward middle- class teen Honey (Kathryn Grant, the future Mrs Bing Crosby) and suited-up sneering cowardly knife-man Gage (Jay Robinson), who learnt to pass for respectable by hanging out where else but at the movies. One night, Gage persuaded society beauty Erica (Carol Ohmart) and her somewhat reluctant military fiancé Lt. Arthur Mitchell (Arthur Franz) to leave their swanky hotel bar for some “safe excitement” watching jazz pianist Kicks in a downtown cellar bar. Here, the slobbish Tom made the first of a series of brutish plays for Erica (who may not have initially been that reluctant to receive the attention) before a plan took hold to kidnap the upscale “square” couple and extort cash from one of Arthur’s connections. Director Harry Horner’s most notable works from the period were the earlier RED PLANET MARS, BEWARE MY LOVELY and VICKI (the remake of I WAKE UP SCREAMING) although he enjoyed a near 40 year career as a production designer on the likes of THE HUSTLER, THEY SHOOT HORSES DON’T THEY and THE DRIVER and there’s something of the latter films’ attention to seedy nocturnal detail present here. What Horner served up is another 1950s example of the DESPERATE HOURS middle-class nightmare of the great unwashed fetching up on their doorstep to try and drag them to their doom (a theme that previously surfaced in THE PETRIFIED FOREST but that here seems to foreshadow the likes of LADY IN A CAGE, THE INCIDENT and even THE LAST HOUSE ON THE LEFT). However, this effort suffers from a somewhat wordy script by its source novel’s author John McPartland (whose edgy Gold Medal paperback originals are well worth tracking down and whose novel NO DOWN PAYMENT became a key if somewhat elusive late 50s skewering of middle-class ideals) that generally tells rather than allows the film to show and therefore results in a movie which often seems somewhat stagy and static. That said, there’s still an often seemingly authentically sleazy atmosphere pervading this long dark night of the soul for the hapless swells and lower depths denizens and if the ending seems rather abrupt and slightly ambiguous as to the fate of one of its principal characters it’s nevertheless a punchy and pungent tale (like its 25c paperback origins) and is definitely worth the attention of period genre fans.