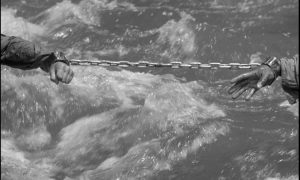 In 1987 I started projecting movies digitally. This was primarily for movie premieres and usually involved a Barco 3 Color Gun Projector. Later when I owned a drive-in I projected “JAWS” using a stacked Mitsubishi 7,000 lumen projector. When I work with a community based theater we utilized a 15,000 lumen Panasonic which filled the screen wonderfully. I saw the potential the digital world could provide. We ran over 20 titles a month and we soon saw that we would begin to draw distinct audiences for different types of movies. We did afternoon matinees of “The Ghost and Mr. Chicken” and 130 people showed up. All projected on as non DCP projector.

Let’s face it 35mm in many ways was an old technology, one that should have been replaced a decade earlier. The issue is when the time came to change the purveyors of the technologies from Texas Instruments Christie, Barco, GDC, and NEC knew that they had to make hay when the sun shined and offered up the new projectors at inflated prices. Now a lot of the pricing increase had to do was to give this projection system an ability to prevent motion picture piracy.

Studios have a right to be concerned about piracy. In 2009, the movie “X-Men Wolverine” was released onto pirate networks more than a month before its official theatrical release date when a workprint copy of the movie was leaked during the post production process. Once content is released onto legal distribution channels, that control goes away. In the case of movies, piracy occurs almost immediately after a movie’s initial theatrical release with so-called “Cam” rips of movies. Cam copies of movies are made by pirates who use video cameras to record movies in the theater, sometimes with ambient audio from the theater and sometimes with audio from a higher quality audio source synced to the source video. Because Cam rips are obtained from an analog source, they usually have relatively low quality, which some research suggests reduces their harm relative to higher quality digital.

It is uncommon to have a pirated movie originate off a 35MM print, it just takes way too much work. Cam rips are really thought to be the worst quality form of piracy. Today it is far more common that pirates work off a digital source coming from a streaming service or a blu-ray or DVD rip. My point is that a lot of the precaution of piracy when the movement to digital was made was not the prevention of an existing piracy but the fear of an emerging form of piracy.

The first test of a digital projection system was in 1992 during Showest. Most exhibitors wisely realized that the new digital model was a liability that was intended to cost theaters and save studios money. The economics for digital projection were challenging. Movie projectors and platters cost in the at most $30,000, while early digital projectors could cost up to $150,000.

In 2006, one could purchase a SONY SXRD projector for around $20,000 that could do a pretty fine job filling up a 35 foot screen. Instead theater owners were forced to purchase $60,000-$80,000 projector in order to make sure their screens would be DCP compliant. In my mind the rise of the regime of the Virtual Print Fee or VPF gave rise to the beginning of the end of the cinema model that arose post “JAWS”.

A Virtual Print Fee was a sum of money that was paid to the exhibitor in order to in some ways subsidize the acquisition of the new digital projection equipment the studios had begun to mandate. It was supposed to be an expression of the cost savings with having to produce a 35mm print of a movie.

I am going to state and state firmly that the VPF fee had 3 purposes; 1. To prevent an escalation of piracy 2. To lower costs for the studios and transfer some of the savings to theater owners 3. Create a de facto serfdom which controlled access to a digital projector and prevent it from using the dexterity of the technology to diversify product offerings. When digital projection was launched people knew that there was the potential to really expand the product offerings for theater along with the need to retrain the audience and redefine the movie going experience. The studios did not want this.

A fence was placed around projection equipment nationwide and the movie offerings began as a result of the pay to play demand by the VPF regime and the market began to shrink. A polarization of content began to occur that would result in the calamity that theaters are facing today. If the potential of digital projects were to be explored beginning in 2005 then the business of exhibition would have been able to set itself on its own path of salvation. Instead the rigidity imposed by the VPF structure may have alleviated some short term pain but it is not evidence that it has created volumes of long term agony.

Movie projectors had a lifetime of 30 years with relatively small monies having to be expended every year in maintenance and replacement parts. I have been in presentations in which companies like NEC would candidly admit that exhibitors would be lucky to get 10 years of use from a digital projector after which they would have to buy a new projector. All the while the exhibitor was laying out cash after cash, the studio would realize beaucoup savings by eliminating the high cost of movie prints with the assorted shipping costs, and instead distributing digital files either by satellite or hard drive. You can be assured that the lion’s share of the saving was ultimately enjoyed by the studios.

The Virtual Print Fee was promoted as giving the industry a middle road between savings and equipment cost for both exhibitors and distributors. It is intended to primarily assist in the replacement of film projectors, and not assist in the purchase of new projection equipment for new construction. To give confidence to financial institutions that digital cinema technology was stable and worthy of investment, Digital Cinema Initiatives were created in 2002, resulting in the release of the first version of the DCI Digital Cinema System Specification in 2005.

The first set of VPF agreements executed with four major studios was announced by Christie/AIX in November 2005. Christie/AIX at that time was a subsidiary of Access Integrated Technology, now renamed Cinedigm Digital Cinema Corp. The agreements were for the rollout of digital cinema technology to 4000 screens. In the agreement sat a sunset clause that once all the projectors were paid for, the theater owners were no longer due any VPF fees providing the studios 100% of the cost saving by going digital.

In 2005 the industry was buzzing with the potential of going digital, although stalled by 16 years because of studio machination there is now an opportunity to realize the digital dream. The regime of the VPF fees is now coming to an end and the Berlin Wall over content that the VPF’s have created are falling. Now is the time to diversify your content offering. Now is this time to invoke a true liberation of the screen and quickly diversify.

All this summer I projected movies digitally on a fixed screen in mall parking lots. People loved it and frankly I saw the rise of the digital dreams of exhibitors. Folks, the door of your digital cage is open, you can walk out if you dare (paraphrasing George Lucas).