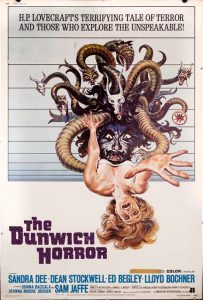 Dean Stockwell (sporting a ‘fro and looking like a sinister disco king) visits Miskatonic University in hopes of “borrowing” the original Necronomicon. It seems that Dean is the grandson of a powerful wizard, and the illegitimate son of a woman who is finishing her days in the padded room of an insane asylum. Sandra Dee and her huge helmet of blond hair accompany Dean back to his isolated farmhouse where she is quickly drugged, talking about sex, having orgasms on altars and dreaming about strange beings (who rather resemble Manson Family members) who chase her along the misty sea cliffs. Suspicious friends arrive to help the stoned Miss Dee, who has no desire to be rescued from her creepy new boyfriend or his awful perm. But the well meaning friends learn some shocking truths about Dean anyway: he has a twin brother, and if looks are anything to go by, then their Daddy was a mutant sushi dinner.

There’s some pretty decent creepy moments to be found in this film. The mood is nice and eerie, the atmosphere as thick and creepy as the fog that lies thick along the coastline beside Dean’s house. We don’t get to see much of the Twin Brother, but the POV shots are nice, done in blood red negatives. Dean Stockwell delivers a truly icky performance as the not-quite-human Wilbur who succeeds in seducing virginal Sandy, whose Good Girl image goes bye-bye here pretty quickly. The ending is a tad rushed and somewhat silly, but everything leading up to it is nice and tense, with minimal gore and some haunting sound effects