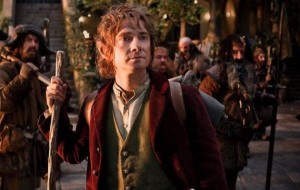 The Hobbit: An Unexpected Journey hits theaters on December 14, 2012 – but not before a three-hour stopover at Comic-Con 2012 in San Diego this July.

TheOneRing.net has also confirmed it will be presenting a Hobbit panel at the show which is expected to feature some cool bonus content from Weta Workshop, along with an update about the site’s Gandalf/Fandalf initiative.

Peter Jackson’s long-awaited adaptation of the classic Tolkien novel will be joined by early previews of Iron Man 3, Wreck-It Ralph, Oz: The Great and Powerful and possibly even The Lone Ranger.

Lucky attendees will also get a sneak preview of Guillermo Del Toro’s Pacific Rim, Man of Steel, the final Twilight film and The Expendables 2.  Rumored, though unconfirmed showings include a number of upcoming genre favorites, such as the Total Recall reboot, Here Comes the Boom, After Earth, R.I.P.D., The Bourne Legacy and 47 Ronin.