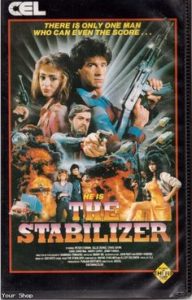 What’s the most violent movie of all time? Rambo III? Commando? Robocop? Add these three very violent together, and you still won’t equal the carnage in The Stabilizer, the wildest, silliest, craziest action movie I have ever seen. For one hundred minutes things blow up and people die in dozens of strange ways. It will make you laugh and cheer, and when it’s all over you’ll be more than a little exhausted. This movie is a buried gem, a cult classic sadly lacking a cult.

The Stabilizer is the nickname of our hero Peter Goldson (Peter O’Brian), a large oily man with a curly mullet. He arrives in Indonesia on the trail of the villainous and mean Greg Rainmaker. We know he is evil because he is only referred to by his full name (“I hate SCUM like Greg RAINmaker!”) and utilizes a method of killing that is so horrible I can’t even utter it here. Wait, yes I can. He steps on people in spiky shoes. Greg Rainmaker: Cleat Killer.

When Greg Rainmaker isn’t pouring alcohol on women for their sexual pleasure, he’s kidnapping important professors and heading a huge underworld empire. It’s up to Goldson (A Jewish action hero? Gevalt!) and his motley crew of sidekicks to stabilize the situation by killing everyone and blowing lots of stuff up. Maybe “stabilize” has a different meaning in Indonesia.

And the violence, oh the violence. This is a film unwilling, nay, uncapable, of letting five minutes of screen time go by without some sort of explosion, knifing, car crash, or squib interrupting the dialogue. The violence is extreme; not graphic and bloody, just really weird. For example, The Stabilizer & company invade one of Rainmaker’s warehouses (by driving through a solid concrete wall on a motorcycle, of course). When perched on the balcony, with heavy fire coming from below, The Stabilizer does the one thing he can do. He drives off the balcony into the guy’s head, his front tire bouncing off it like a basketball. Astounding.

From the overly-gratuitous love scenes (Both major female characters hop in the sack with the hero of their choice not two minutes after they speak to them alone for the first time) to the poorly dubbed dialogue (“Victor, you talented bastard!”) The Stabilizer has it all. This is a film for the ages, right up there with Citizen Kane and Gymkata. It is not widely available in release. If you find it anywhere for any price, buy it and relish the insanity.