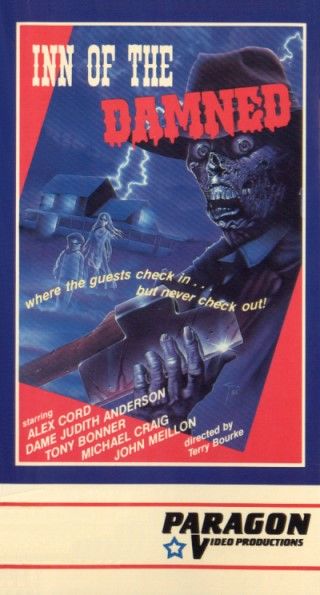 Read anything about “Inn of the Damned” and you’ll doubtlessly come across a description of the way the movie was intended as a one-hour long episode of a TV series that was to begin with the director’s earlier “Night of Fear”. The TV show idea was scrapped when the ABC failed to pick it up, and so Bourke expanded his concept into an almost two hour long movie.

Read any review of the movie, however, and you’ll read about the movie’s strange, unsuccessful melding of two genres: the western and the horror movie.

What you WON’T read, however, is what a fantastic short horror movie was buried in “Inn of the Damned”‘s almost two hour length. It features the fulfillment of the promise Bourke showed in “Night of Fear”, with some genuinely shocking, disturbing, and nail-biting moments.

Alas, these all come too late for those of us with short attention spans. The movie doesn’t really try to mix the two genres; it starts as a tepid horror movie, has about an hour long preamble as a middling western, and then goes into full-on horror mode. The horror story could’ve been told in any time period.

The movie jolts us back into its REAL story with a strange subplot about two young women who stay at the titular inn who hate each other, but the older has sapphic feelings for the younger. Some would say that this is just more bizarre preamble before the movie gets going again, but I see it as a fantastic beginning of the superior and worth the price of admission, final act. It supplies us with nudity and lesbianism, yes, but also a macabre subplot that comes to an even more macabre end. And so the end begins in earnest.

I scoffed when I saw the “Hitchcockian” quote on the video cover. I was wrong. The master would have been proud of the movie’s suspenseful, shocking and disturbing final moments. It’s just too bad you have to wait so late in the movie to get there.