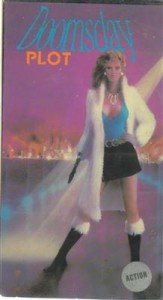 For a short time in the 1980s, Emmeritus was CanCult’s king—not in quality, but in sheer quantity. Like Meridian, Cinpix, and Quadrant before it, the largely invisible Hamilton-based Emmeritus Productions was a resolutely independent venture dedicated to crafting unique genre films that eschewed the homegrown film industry as a whole. Following a grueling schedule that excreted out a new made-for-TV movie every two months for seven years, Emmeritus specialized in aggressively bad, amateurish B-films that made company head Lionel Shenken easily one of the most prolific Canadian producers of the decade.
A horticulturalist by trade, Shenken got his start in showbiz as the host of Man around the House, an early 1960s gardening show on Toronto station CFTO. After producing a series of TV commercials, Shenken began creating music programming for upstart Hamilton station CHCH, which would soon become home to exemplary Canadian television series like The Hilarious House of Frightenstein and Smith and Smith’s Comedy Mill. After a poor critical reception to his initial local talent-based dramatic anthology program, Niagara Repertory Theatre, Shenken began to look for a change of pace, something that could tap into the voracious appetites of the cable networks and home video market of the early 1980s. With a relatively inexpensive U-Matic camera in hand, he pitched a series of micro-budgeted action-adventure films to his bosses at CHCH, embarking on a journey of schlock that would keep him busy throughout most of the decade.
According to Shenken, each of the more than 30 films eventually produced under the Emmeritus banner was pre-sold to several foreign markets and then cranked out for roughly $375,000 (although the actual number probably figures much lower$30,000 each according to one source). Not only were the films broadcast on CHCH in Canada, but they also appeared on the cable channel USA Network, the home to the infamous schlock showcase Up All Night. Completed on a strict schedule of 25 days, Shenken boasted that he had cultivated a precise, cost-saving formula for each of his films. Shot on video using completely unknown actors and non-union crews, he claimed that no scene in his productions was allowed to be longer than two minutes, and an action scene was required every six minutes, ensuring that even if the plot didn’t make much sense, that at least the films would clip along at a steady pace. With an eye to overseas sales, he also wanted at least one lead character had to be a visible minority, a sometimes awkward requirement that saw many Emmeritus films boasting two protagonists.
While not every Emmeritus film follows these rules, most of the fims fall sqaurely within the action-adventure category—buddy cop mysteries, buddy smuggling plots, buddy mafia takedowns and buddy Vietnam revenge films, Shenken did tackle horror, science fiction, and in one case, a historical epic. No matter what various genre requirements each film fulfilled, however, there is one thing that all the Emmeritus titles have in common: they’re uniformly terrible. In many cases, these films were a crash course in filmmaking for the inexperienced actors and directors, a ramshackle motion picture assembly line where any industrious young film hopeful could get his or her foot in Shenken’s door, and come out a month or two later with an internationally available movie under their belt. Still, Shenken did manage to cultivate a small group of loyalists to his low-budget vision, with many of the same actors appearing throughout the Emmeritus oeuvre. The enterprising producer even gave a first break to Charlie Wiener, who would go on to helm Canuxploitation classics Dragon Hunt and Fireballs and Allan Levine, who later found work as a line producer on several of Jerry Ciccoritti’s B-movies. Ghostkeeper director Jim Makichuk also made a few films for Shenken during this time, the only previously employed filmmaker to do so.
Despite their often mind-boggling faults, what is most surprising about the Emmeritus films is that all of his films are set precisely where they are shot—in Canada. Often struggling to tie their wildly illogical plotlines back to their native land, the films are not only proud to feature Mounties and red and white maple leaf flags waving in the distance, but to incorporate the Canadian setting directly into the story, whether it’s as a haven for Vietnam escapees, a port for smugglers, or just a convenient backdrop for a murder mystery.
Besides brief runs on North American television, many of the Emmeritus titles made their way to the booming VHS market in the 1980s, where crudely drawn covers and embellished plot synopses attempted to entice curious video store patrons into a regrettable rental. These tapes, now floating around used bins and internet auction sites, are the sole remaining signpost to the strange legacy of Emmeritus—some of the rarest, and undeniably most patriotic contributions to Canuxploitation.