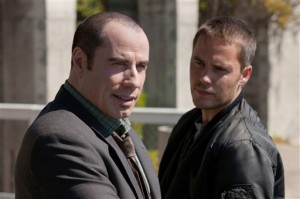 “Savages” is a much better movie than it could have been mainly thanks to the gifted directorial talents of Oliver Stone.In the hands of somebody like Michael Bay, this easily could have been another soulless, meaningless summer blockbuster like “Bad Boys II.” Stone however, manages to tell a compelling story about a Mexican drug cartel with effective violence and characters. The film probably won’t go down as one of the preeminent outings from Oliver Stone. As an entertaining B-movie with no shortage of attractive stars though, “Savages” is ultimately a success.
Based on the novel of the same name by Don Winslow, “Savages” centers on three young people that get mixed up in a drug war. Blake Lively is O, short for Ophelia, a rich California girl whose daily routine consists of shopping and having sex with her two boyfriends. Her lovers are Chon, played by Taylor Kitsch from “John Carter,” and Ben, played by Aaron Taylor-Johnson from “Kick-Ass.” They’re all extremely casual with their three-way romance, thinking of each other as soul mates.
Getting to sleep with a beautiful woman every night and making a steady living growing marijuana, Chon and Ben seem to be living the dream. That is until they piss off a Mexican drug lord who does not take insults lightly. As payback, the drug cartel kidnaps O. They tell Chon and Ben that they will get their girl back in one year as long as they cooperatively provide their services. Knowing that O won’t last long as a hostage, Chon and Ben devise a plan to rescue the damsel.
Kitsch, Johnson, and Lively are all fine in their respective roles. But the real scene-stealers in “Savages” are the more experienced, veteran actors. Benicio del Toro is first-rate as Lado, the menacing second in command of the drug cartel who is virtually without compassion. Despite his limited time on screen, John Travolta leaves a substantial impression as a crooked DEA agent caught up in the middle of this mess. The film’s apex performance comes from Salma Hayek as the drug kingpin, who steals all the best lines as she chews out her enforcers. “Savages” might have actually been a great film if it was entirely about Hayek’s character and her rise to power. But Hayek’s supporting role still makes “Savages” well worth the ticket of admission.
About twelve years ago Steven Soderbergh made “Traffic,” a deep, fascinating exploration of illegal drug trade. “Savages” is much more conventional, commercial film that’s heavier on shootouts. The film also leaves the audience on a bit of a cheated note with a lame ending that fakes us out. Stone has essentially made a neat crime thriller with strong characters and fast-paced action. That’s all well and good for mainstream audiences. If you’re a huge Oliver Stone fan though, don’t walk into the movie expecting something as challenging as “Natural Born Killers.”