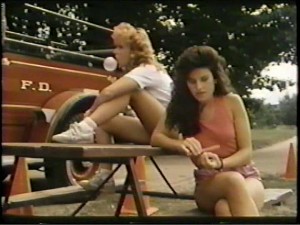 Ah, the vanity project. Films meant to showcase the utter brilliance of those involved are a dime a dozen on Canadian arthouse circuits, but when it comes to our b-films, they aren’t quite so common. Rock N Roll Nightmare is a prime example, in which budding rock star Jon Mikl Thor wrote, produced and starred in a film to promote his musical talents to the world by fighting evil puppets. But there’s an obscure little sex comedy situated at a firehall that fits this bill as wellFireballs. Fireballs writer, producer and star, Mike Strapko, wasn’t interested showing off his skills at extinguishing five-alarm blazes. No, it seems that Mike and his buddies made this film with a loftier goal in mindmeeting strippers.
Directing this hormonal curiosity was one of the most shadowy figures in Canuxploitation, Charlie Wiener. Wiener has made only a handful of Canadian films, but all are embarassingly amateurish productions, such as the McNamara Brothers’ kung-fu epic Dragon Hunt (another ego project in it’s own right) and The Porn Murders, a self-explanatory TV movie. He also wrote Rafal Zelinski’s Canadian teen sex comedy Recruits, on which Strapko, his brother, and Fireballs co-star Goran Kalezic all worked as “Production Assistants.” In fact, it appears that Fireballs was filmed directly after Recruits, with the same location (Wasaga Beach), as well as some of the same crew and talent.
The film even opens on the notorious Northern Ontario beach itself, where three precocious firemen are in the throes of a big party. Sam (Goran Kalezic) is a ladies man, Keith (Eric Crabb) is a ladies man with a particularly long “weekend warrior” mullet, and Baduski (Mike Strapko) is a thick-headed drunk whose emulation of John Belushi has even overtaken his character’s name. Suddenly, the fire bell goes off, and the ragtag heroes drunkenly rush to the fire hall… only to discover that it’s all a ruse for yet another shindiga surprise birthday party for their mascot, Fireballs the parrot!
With such exciting opportunities for ” hilarious” voice-overs that might prove Fireballs as the ultimate hard-partying parrot, it almost seems like a shame to get on to the real plot. Japanese businessman Mr Matsuro wants to build a factory in town, and the Mayor bends over backwards to clinch the deal. He promises to pave over a park, and offers the use of the town’s river as a garbage dump. But, anticipating the numerous deadly infernos that his factory is sure to be subjected to, Matsuro is most interested in the preparedness of the Mayor’s esteemed fire department.
When they go to check it out, the Mayor finds the post-party firehall totally trashed, with naked ladies everywhere. Matsuro is furious, and demands that he be allowed to import his own crack squad of Japanese firemen. The Mayor compromises by telling Sam to hire four new recruits, and then assigns Fire Chief McGregor, the requisite “asshole” screwball comedy authority figure, to keep them all under control. So how do those crazy mulletheads pick their new firefighters? Why, with a bikini contest, of course! After selecting four girls, they also pick four nerdy guys so McGregor won’t get suspicious. In a move that anticipates reality shows by a good decade, a large chunk of the film’s running time is then devoted to running the eight candidates them various drills in a contest for the coveted firefighter positions. But not trusting that the girls can actually do it, Sam, Keith and Baduski go to screwball comedy lengths to fix each event so the guys lose.
With the girls now on the squad, the plot starts padding itself out with more training exercises for the ladies, usually relating to nudity in some convoluted way. Meanwhile, the guys watch, drink beer, and make bets on how bad the girls will do without their manly assistance. Finally, operating the motorized ladder on top of the fire truck, one of the girls accidentally throws Baduski through the window of a topless massage parlour. As a result, Matsuro’s appointment is cut short and he has the whole squad fired. Their Japanese counterparts are quickly brought in to take over, only there’s a small problem they turn out to be even harder partiers than our heroes!
The dejected Fireballs crew decide to party off their disappointment at Keith’s parent’s cottage, but no one shows upeverybody’s already going crazy at the firehall with those wild Japanese firefighters! Boy, I sure hope those Japanese aren’t too hung over to stop a real fire the next morning, or they might give the Fireballs a chance to redeem themselves, get their jobs back, and drink beer with a parrot.
Made at the very end of the second wave of tax shelter films, Fireballs was also one of the final Canadian screwball comedies attempted until Damian Lee resurrected the genre with Ski School (1991). Unfortunately, it’s definitely a whimper, not a bang. Few films can make nudity boring, but Fireballs’ repetitious parade of predictable exposed anatomy gags pushes the viewer to a state of sheer disinterest. On the plus side, Fireballs contains an ambitious amount of explosions for a low-budget film, but the exploitive scenes of nudity and crashes can’t really hide the flubbed lines, unbelievably offensive stereotyped characters, and consistent lack of humour that plague the story.

On the surface, Fireballs is a run-of-the-mill Canadian “balls” comedy (and a particularly mean-spirited one at that), but it does take on a weird aspect when you consider the role of the film’s guiding creative force, Mike Strapko. What is intriguing is Strapko’s potential reasoning for making the film. Obviously, being a fireman gave him access to fire equipment free of charge, but something else must have motivated his dream of bringing disrobed firefighters to the silver screen. Did he anticipate big box office or a future career as a leading man? Was it a drunken boast? Was he trying to reinvent himself as some stud in a personal sexual firehall fantasy? Or did he do it, as I suggested earlier, as an opportunity to meet girls who were willing to lift their shirts on cue? I’m not sure about you, but I think my money is on the last one.