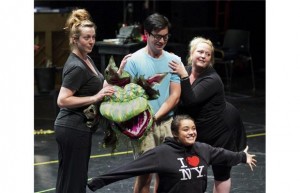 “It’s not just ironic or something goofy,” says the 37-year-old director, writer and actor, who is also an artistic director for Victoria’s freak-theatre company Atomic Vaudeville. “For all of its subject matter, it’s actually beautifully crafted.”

No, Richmond isn’t shamelessly repping Ride the Cyclone, the psychedelic romp he co-wrote that won critical raves and industry awards after its winter residency in Toronto.

Based on the ’60s B-movie of the same name, it’s about Seymour Krelborn, a nebbish nerd looking for love whose pet Venus flytrap sprouts into a jive-talking bully with an insatiable appetite for human flesh.

“We’ve been trying to focus on the sincerity of the love story,” Richmond says unironically. “Actually, when you look at some of the songs, they’re really quite powerful.

“It’s the most moving man-eating-plant musical out there,” he laughs.

The production boasts several Ride the Cyclone alums, both on stage and behind the scenes. Actors Kholby Wardell and Kelly Hudson – who played school-age victims of an amusement-park accident in the Victoria-grown original – star as denizens of Little Shop’s seedy Skid Row.

Along with Richmond, musical director Brooke Maxwell co-wrote the songs and lyrics for Ride the Cyclone. And choreographer Treena Stubel concocted steps for both projects.

“It’s really great because we have an amazing creative shorthand,” Richmond says. “And [Wardell and Hudson] are very strong actors and very versatile.”

“It’s exciting to have that sort of the pre-existing relationship,” says Wardell, who is now based in Toronto.

The supportive environment, he adds, has helped him make the “challenging” transformation into Seymour, Little Shop’s beleaguered protagonist.

“He is a little bit slower than I am as a person, just in terms of the awareness he has of what’s going on around him,” he says excitedly.

The Atomic Vaudeville vets are not the only notable names in the cast. Sara-Jeanne Hosie, a mainstay of the West Coast theatre circuit, plays Audrey, the musical’s wide-eyed ingenue and Seymour’s love interest. Jeff Jones, the blues and jazz singer who has performed with the Count Basie and Lionel Hampton orchestras, will lend his bellow to the person-eating, funk-belting grown-up version of Seymour’s pet plant.

(Bringing the beast to life is a two-person task. While one actor sings and delivers dialogue, another animates a giant green-andred puppet on stage.)

“It’s a struggle when one of your stars is a puppet,” says Richmond. But he insists the wrinkles in this delicate dance got ironed out in rehearsal.

After Little Shop’s summer stint, he and the Ride the Cyclone gang will gear up for a winter tour that include dates in Vancouver, Edmonton, Calgary and Saskatoon.

In preparation for the jaunt, the crew will work to implement changes they developed in recent workshops with big-name theatre producers Toronto’s Morris Berchard and New York’s Kevin McCollum.

“It’s been really interesting in terms of trying to make it more of a Broadway show,” Richmond says.

“We’ve been focusing on the storytelling, and the producers want more songs.