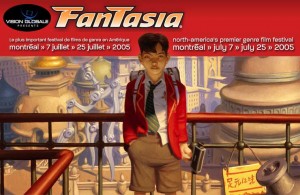 Its the 16th edition of Fantasia, and on this occasion, we present 160 films that take your breath away. Get ready to enjoy bizarre and brilliant works. You will experience unparalleled in our cinemas. You will be electrified, inspired or provoked by individualistic and creative achievements. This year it will be unheard of! You will rarely get to see a vast array of film styles as varied from different cultures, different budgets and different perspectives. They’re waiting room and promise to entertain you intensely. The international genre cinema has never been so fascinating. Besides, he never made ​​so many facets.

In order to encourage the viewer to take the kind of risks we, programmers, take regularly, the price of our tickets affordable. As always, our program includes an eclectic mix of works by established and recognized filmmakers and film revealing the talent and ingenuity of emerging artists whose names will remain so in your minds. Many of these films will be screened for the first time on this continent and many for the first time in the world.

We will be awarding one Award for Lifetime Achievement to David Bordwell , a famous film theorist and a personality whose writing (regularly in collaboration with his wife Kristin Thompson ) has affected the lives of many of us .

A mini-tribute will be paid to the inimitable iconoclast Jennifer Lynch , the world premiere of CHAINED and the launch of despite Quebec THE GODS.

Documentaries From The Edge is back for a 6 th year and its size has doubled since the beginning! The hacktivism. The life-size dolls. The Amityville haunted house. It is only the tip of the iceberg.

Since the mid-2000s, the Philippine cinema is undergoing a renaissance vital, fueled in part by the affordability of digital technology has enabled a new generation eager to dive into the middle. With our constant endeavor to present new films in Montreal of national cultures, we are proud to project a selection of films from the Philippines that delivers a raw perspective of this country. These films will leave you speechless for years to come.

On the other hand, we braquerons spotlight on the cinema of Denmark and Norway , who is no stranger to our screens, some of the most expensive titles to our history has been produced by these countries.

2012 marks the centenary of Nikkatsu , the studio’s oldest and most influential of Japan. Since its founding in 1912, Nikkatsu has contributed to the formation of film language as we know it today. Also, he boldly explored the extreme limits of all types, raising some of the most visionary of international cinema. To celebrate the 100 th anniversary of the studio, Fantasia agrees with our friends in the New Cinema Festival to present a retrospective of some key works for Nikkatsu. Expect to see other outstanding works of Nikkatsu when FNC will start this fall.

Classics by filmmakers such as Walerian Borowczyk and Andrzej Zulawski will surge on our screens in a series of special screenings to celebrate the launch of the phenomenal world premiere book House of Psychotic Women of Kier-la Janisse , published by the house UK publisher FAB Press.

The animation in all its forms and disciplines has always held an important place in our hearts. This year, we decided to create a permanent section dedicated to the art form: AXIS . Social realism to fantasy breathtaking, all styles and sensibilities will be highlighted at a larger scale than ever. We are proud to rename our jury prize in the Animation Price Satoshi Kon rewarding excellence in animation , named after the late visionary whose first feature film, PERFECT BLUE, had its world premiere here in 1997.

In addition, we created a section to enhance the visibility of action films in our program – Action! You need to shout as if you were on a film set, in case you were wondering the meaning of the exclamation point .

DJ XL5 will present a series of screenings of rare 35mm prints of Italian exploitation films dubbed in French (this is how many of us have known them in Quebec), culminating with an evening Zappin ‘Party centered in Italy .

Another event is that we are proud to launch the world premiere of a prestigious exhibition – If They Came from Within: An Alternative History of Canadian Horror . An idea of the chief editor of the magazine Rue Morgue , Dave Alexander, the project brings together some of the best filmmakers of such Canadian, who were asked to imagine projects that would have easily been possible in the 60 , 70, 80 – and in some cases in the future – of our national cinema, and then marry the concepts and stories (which appear in French and English, in the filmmakers’ own words) with some of the most graphic artists acclaimed in the country. You will be amazed by the result!

2012 is the inaugural year of an exciting new initiative for us: the market of international co Borders , led by Stephanie Trepanier. Thus, we hope to lead a wave of co-productions involving advanced some of our favorite directors. Want to see Jason Eisener Halifax (HOBO WITH A SHOTGUN) team up with Ant Timpson of New Zealand (THE DEVIL DARED ME TO) to produce a film of the collective Quebecois RoadkillSuperstar (THE BAGMAN)? We! Borders and we are working on what it materializes. The list of great filmmakers with projects in our market this year also includes Stuart Gordon, Jorge Michel Grau and Bruce McDonald . We are very excited!

Along with Borders, we offer an increased number of panels, about a broader range than ever of topics of interest to filmmakers and film lovers, and all this completely free. Explore!

Add to that over 120 filmmakers from all over the world, eager to get in touch with you during intensive sessions of questions and answers are projected in the usual course more partying and surprises. You will stand more upright when it’s over and neither do we!

On behalf of all of us on planet Fantasia, I would like to thank you for your support and your passion immeasurable. Your mirrors our frenzy and has changed the lives of more filmmakers are coming here as you can imagine. We love you because you are helping to make dreams a reality.

Now, turn off the lights and let the party begin!