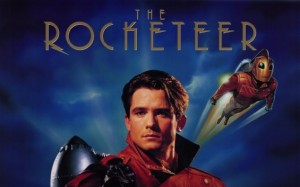 One of the movies of my childhood that I hold close to my heart is The Rocketeer. Starring Bill Campbell as a young race pilot who stumbles upon a stolen prototype jetpack, he fights the bad guy (Timothy Dalton) and saves the girl (Jennifer Connelly) as the Rocketeer. It was based on a comic, and the 1991 film is charming as the B-movie affair it is.
Instead of just letting Marvel, the Muppets, and Pixar carry Disney in the movie scene, it looks like Alan Horn — chairman of Walt Disney Studios — isn’t content with that. According to Vulture, Disney is meeting with writers to hear some ideas on how to reboot The Rocketeer. Disney still owns the rights to the comic property, which was created by Dave Steven for Pacific Comics in 1982.
Much like Disney did with Tron, they could take a film from their past and introduce it to a whole new generation of movie-goers. While The Rocketeer was nowhere near as successful as Tron, it has a good cult following, and it’s a really good movie. I think it’s a fair guess that a rebooted The Rocketeer wouldn’t look at all like its predecessor. It could be a sequel, but that’s unlikely. It would make more sense to start fresh, whether it take place in 1938 Los Angeles or present day. A more modernized version of the iconic helmet would probably be in order, as well.
I’m all for a reboot of The Rocketeer. While I was very against a reboot of Total Recall and movies of that sort, The Rocketeer is different. It was never a major blockbuster film. It was a really good story with good characters from a good comic that made a good film that can be successful nowadays. A good-hearted, charming hero like Cliff Secord is what today’s movie landscape could use. And it could use a good bit of nostalgia-done-right.