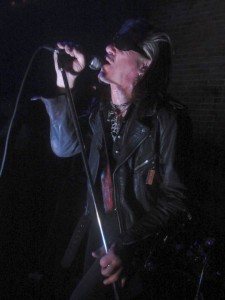 Before Marilyn Manson and Nine Inch Nails, there was My Life with the Thrill Kill Kult (TKK). Formed in 1987, TKK paved the way for industrial music acts, such as Manson’s to flourish. Originally, My Life with the Thrill Kill Kult was to be the name of a movie conceived by founding members Groovie Mann and Buzz McCoy. The movie was never completed. However, the music Groovie and Buzz created for it made an impression.
At the time, the most notorious industrial label was Wax Trax! Records who decided to give TKK a chance. After positive responses to a 3-song EP that was supposed to be the movie soundtrack, the band released its first album in 1988 titled I See Good Spirits, I See Bad Spirits. The album was welcomed with open arms from music lovers, but protested by various religious organizations for its dark and satanic imagery. Songs like Do You Fear for Your Child and On this Rack delighted the patrons in Goth and underground clubs, while parents and much of mainstream America found a new scapegoat to explain why the morals of society were being lost.
Their success continued with future album releases, appearances on soundtracks and in movies. When I was eight years, old I saw TKK in the Brandon Lee film The Crow. I bought the soundtrack on cassette when I was 10, and I’ve been a fan of TKK ever since. Sixteen years later, vocalist Groovie Mann and keyboardist Buzz McCoy spoke with me before embarking on their “Back from Beyond!” 25th anniversary tour. I always try to maintain my professionalism, but this time I’ll admit this is an honor for me to interview TKK.

Photo by Grant V. Ziegler – Singer, Groovie Mann, belts to the crowd.
They will return to Dallas Sept. 25 at Trees, with local industrial monsters The Razorblade Dolls. And although their impact on society has wavered over time their fan base remains intact. They’re still touring, releasing music and proving that the devil doesn’t go away so easily.

1.Your last full-length album came out in 2009, what’s in the works for TKK currently? Are there side projects going on as well?

Groovie Mann: A new TKK is always in the works!

Buzz McCoy: We’re currently finishing up our first Bomb Gang Girlz [TKK’s backup singers and dancers] album called A Taste 4 Trouble, which is coming out this summer. [A Taste 4 Trouble was released July 31]

2. It seems the band has fluctuated between very dark and sinister industrial and evil-disco-funk. What would you consider the identity of TKK to be now after all this time?

B: Hmm. I never really labeled our music anything. Our sound encompasses so many styles and flavors.

3. Do you still get protests about your music, name or lyrical content or are we living in a day and age where TKK can be more accepted?

G: Not so much. A Christian here and there still is concerned for us.

B: I haven’t heard about anything like that. Today, anything you can imagine is available at your fingertips on the Internet. I think we’re rather tame compared to what’s out there.

4. With the evolving sound of industrial and electro music, how does TKK manage to stay relevant and desired without giving in to the new sounds that are taking over the airwaves?

G: I’m unfamiliar with new sounds. We steer into our own world and exploit them.

B: We don’t follow any particular “scene” or “trend”. We just create what’s in our heads at the time.

5. Where do you see the industrial scene going?

G: Is it still there?

B: You’d have to define industrial. To me that means bands like Einstürzende Neubauten and Test Dept. That scene seems to definitely be gone.

6. This will technically be the 25th anniversary of TKK, what can you tell us about the experiences you’ve had and the things you’ve gone through?

G: We are fortunate to be here due to the loyalty of our fans. I guess you may have to wait for the book (or film) to hear about all the tales.

B: I think we’ve maintained a long career due to the fact we don’t listen to anyone but ourselves, and follow our own path. It may not always be the most wise decision or what a label or fans might want, but remaining true to yourself will keep you going forever.

7. After going through Wax Trax! and Interscope Records, how different is it having your own label, Sleazebox? Do you find it as successful?

G: Well you can always know what’s going on! Bands need never to depend on anyone to make them. They need their own plan.

B: Nowadays labels really aren’t necessary if you’re creative with social networking, etc. Labels are good for promotion and maybe satisfying a band’s need to be “signed,” or whatever. People download now. They don’t buy CDs much. Music is basically free now. That’s why a real band tours… a lot!

8. You were one of Marilyn Manson’s first-ever interviews back when he was a journalist named Brian Warner, and he said you were the scariest people he’d ever met. Seeing what he’s become and accomplished, what does that say about you?

G: Maybe we are! Were? Maybe because we laughed at religions in a time where others weren’t so vocal about it. Maybe we are an inspiration to others, and that inspires other rebels.

B: Perhaps at that time Brian hadn’t been exposed to folks like us. The Florida scene is very different from the Chicago scene. I assume we don’t appear scary to him anymore.

9. The content and lyrics of TKK are generally evil yet sleazy. How did you go about making Satanism look sexy?

B: Everything can look sexy… if you approach it in the right way. The devil’s a tempter. So is sex. They go hand-in-hand.

B: We don’t follow politics. It seems such a useless waste of energy. If that’s your calling, fine! Save the world and make it the way you want. I kind of wish a fatal virus would just come along and destroy this cancer called humans. That would be awesome.

11. Everyone seems to focus on the darkness of TKK, but how much fun is it being in TKK?

G: Fun is there for sure, but it’s a head-trip-emotional-joyride through one’s best-kept secrets exploited through the sound of music! ha! Whatever that means!

B: Fun? Hmm. It can be. But it’s also A LOT of work. We don’t do it to have fun. We do it because we’re artists and can’t do anything else.

12. How do you feel about dubstep and how almost every mainstream artist does a song with Skrillex or Deadmau5 to try to make their hits?

B: I have no idea what dubstep is or the bands you mentioned. I don’t listen to much music.

13. Sinister Whisperz truly showcased the earlier and darker side to TKK. Why did you all decide to go back and focus more on your earlier works after releasing Death Threat? Was there a demand for it?

G: It wasn’t a go-back, as TKK’s life fluctuates emotionally through its trail of anxiety and control and adventures.

B: I think I was kinda bored one day and decided to revisit our old friends (songs) from the Wax Trax! years. It was also in anticipation of the Wax Trax! 30-year Anniversary show we played last year.

14. Now that you have done the Wax Trax and Sinister Whisperz tour, would TKK consider doing a tour showcasing only the bluesy, techno albums, such as Reincarnation of Luna and Gay, Black and Married?

G: The Filthiest Show In Town! We always consider that. And a lounge show!

B: We usually touch on everything in our shows. Last year was the first that we played exclusively the “older” material.

15. Is this where you wanted to be when you started out back in 1987? Anything you would have done differently?

G: No. We like being everywhere and multi-faceted. Differently? I think I’m pretty satisfied to still be here creating, writing, touring and still being able to exist after the major flood out in the music world.

B: We had no goals, No expectations. So naturally we are more than thankful for anything that has come our way. Perhaps I would have done less drugs if I new I would have to live this long! (laughs)

16. Let’s say Satan is real. What do you think his favorite TKK song would be?

G: Kooler Than Jesus of course! haha!
B: I agree!