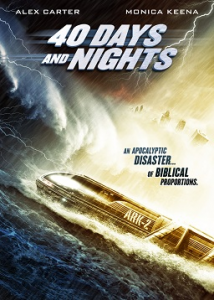 ’40 Days and Nights’ is the newest disaster film by The Asylum due out November 27th.

“When a colossal tectonic shift causes the sea level to start rising, a microbiologist gathers the DNA of as many species as she can, while the military creates an “ark” in a desperate attempt to preserve life on Earth”

Awhile back The Asylum approached writer H. Perry Horton who wrote several other screenplays for them (Shark Week, 2 Headed Shark Attack, and A Haunting in Salem).  “The Asylum came to me with the idea basically in place, the tectonic shift, the DNA collection, the Ark. I put it together a few different ways, and one of them clicked” H. Perry told Bmovienation.

’40 Days and Nights’ is H. Perry’s first disaster film screenplay and he told us about the new challenges he possessed.   “This was very different from the other scripts I’ve written for the Asylum, purely in terms of scope. In A Haunting in Salem and my 2 shark scripts, the events are only happening to a small group of (unfortunate) people. But in 40 Days, though we only focus on a small group of people, this thing’s effecting the whole world, it’s drowning hundreds of millions of people and wiping clean the face of modern human civilization. This isn’t just a shark munching on coeds, this destruction on a Biblical level. So sticking to the core group while still trying to show the global ramifications I found challenging, in a really cool way.”

For more information and to watch the trailer for ’40 Days and Nights’ go to The Asylum’s website page and check out H. Perry’s IMDB and blog Committed.