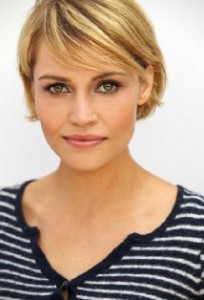 Anyone that can put a movie together deserves tons of credit, the blood, sweat and tears that go into making a movie must be praised no matter what….usually.

‘Birdemic Shock and Terror’ was the most recent Rifftrax simulcast and it was an easy target for the Rifftrax crew.

The long drawn out driving scenes got so long that you just had to laugh.  The messages the director/writer was trying to send were so forced that, again, I had to laugh.  Not a movie you should watch by yourself, but with a six pack and friends you’ll probably get good laughs.   Make that a twelve pack just in case.

What made Birdemic tolerable was Whitney Moore who played Nathalie.  After ‘Birdemic’ Whitney appeared in several B movies and shorts and I had the honor to ask her a few questions about ‘Birdemic’ and herself.

‘Birdemic’ had a small crew and limited locations. What was your biggest obstacle you ran into while filming?

WHITNEY: One of the biggest obstacles while filming was that there really was no crew; it was often just the actors and James Nguyen on location, so we all sort of had to pull our own weight and figure out how to manage the equipment. One example I always go back to is one scene we didn’t have anyone to hold the boom stick, so I ended up holding it between my knees while talking to Alan!

When and how did you get into acting?

WHITNEY: I have wanted to be a professional actress since I was a small child; I’ve been doing plays since elementary school. My older sister Kirsten first inspired the love of theater for me because she was in the local musical theater, and of course, I wanted to be just like her- so I tried it and I loved it.

Can you tell us a little about ‘Birdemic 2: The Resurrection’?

WHITNEY: I can tell you that what I’ve seen is insane and super fun, and that fans of the first movie won’t be disappointed. I can’t tell you that much about Nathalie’s progression as a character or about the plot itself; not due to any sort of nondisclosure agreement, but simply because I actually, ultimately have no idea what the movie is about. Much like the first one, a lot of the movie was made up on the spot. I don’t think anyone should be worried about the sequel being too self aware, at least on James’ part. I certainly had fun with it.

Did you happen to watch the Rifftrax of ‘Birdemic’ or know about it?

WHITNEY: I went with a bunch of friends to see it! They did such a great job, and of course a movie like Birdemic is begging to be riffed on. It was an honor!

What else are you working on and will we see in more B movies soon?

WHITNEY: I’m a student at CSUN, which takes up a lot of my time. Between that and going to auditions, I’m working on a Kickstarter campaign for a film that has some B movie qualities, but will hopefully be quite a few levels above ‘Birdemic’ in quality. I’m hoping people who like ‘Birdemic’ want to see me act in something a little more…legitimate. Stay tuned!