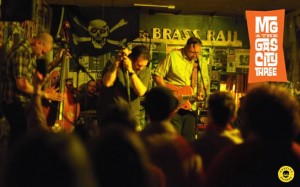 ‘Gila!’ includes original music by ‘MG & the Gas City 3’, a band from Northern Indiana on Gas City Records. They mix rock, country and a little punk to give it that old fashion rock and roll sound which is perfect for Gila’s time period. Their classic scene is at the holiday event and when a fight breaks out between Chase and Waco Bob. ‘MG and the Gas City 3’ quickly plays ‘Cat Fight’ (On their album the song is titled G Billy’s Rebel Show) which added to the excitement and energy of the fight, plus it was a bit comical how their song appeared to cheer on the fight.

Nathan Strieidnger– “It was a blast working with Jim, Bill, Cast, and Crew. The wonderful and talented Christina DeRosa sang Fever by Peggy Lee and just nailed it. That’s hard to do! You can tell in the film, we’re blown away. We’re all huge Wynorski fans!”

How did you get the opportunity to work with Bill and Jim on Gila!?

NATHAN: Let me start out with…We’re all big fans of Jim Wynorski! You know, I never asked Jim that question — I figured they’d heard about us. We really fit the bill perfectly for our part.

When and how did MG and the Gas City 3 assemble?

NATHAN: Marc Gullion (MG) and myself assembled this band back in 2010 after moving back from Chicago. We wanted to do something different and MG loves rockabilly, punk, and country.

Did performing in Gila! open any new doors for you guys?

NATHAN: We expect more of a bump after the movie gets sold/leased, but it’s really helped us get our name out there. Hopefully Jim calls us for other stuff. We’re huge Wynorski fans.

Would you like to perform in movies again or was this a one time thing?

NATHAN: Well sure, but we’re sort of partial to Wynorski and/or B movies.

Any plans on playing in other Midwest cities next year?

NATHAN: Yes. Gas City Records is in the middle of booking our tour.

Check out their website at www.gcity3.com or Gas City Records for concert information and listen to their music and get connected with them on Facebook, Twitter, and Google+.