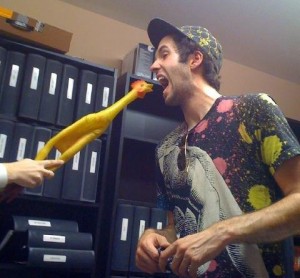 Line Producers have a challenging job which includes making sure filming runs smooth and stays on budget.  Their responsibilities are endless and sometimes they have to be the bad guy taking control of problems during filming.  When it comes to the audience sometimes the Line Producer is a thankless job so next time you watch a movie give a salute to the Line Producer.

You can probably write a novel describing your job as a Line Producer, but can you summarize your responsibilities from the moment you’re brought on a project till it’s ready for distribution?
DEVIN: Essentially, my job one a script is available (and sometimes, even when we have no script) is to take a project into physical production. I oversee budgeting a project, hiring the crew, the cast, booking locations, setting up accounts with vendors, etc. Basically, I provide a platform for a director to make a movie. Once a film starts shooting (usually 4-5 weeks after I start prepping), in theory, my job gets easier. I resolve day-to-day production issues, but if I’ve done a thorough enough job in prep, those are usually minimal. After a film wraps principal photography, I’ll wrap the production department: make sure everyone is paid, close out accounts, and check in with post to make sure they’ve been delivered all of the necessary materials.

How do you manage stress when time and money is a problem during filming?
DEVIN: I said this question aloud and another LP in the office said “Oh man, that IS a good question”. We all do it differently, and none of us really do it well. Usually sleep and eating are the first to go. But my prerogative is always to not stress out on my crews. No one appreciates a cranky LP and it can decimate moral.

Besides staying on time and budget what are your biggest obstacles?
DEVIN: It’s always something unique. Usually it’s schedule. Balancing actor availability against location availability is tough and we’ll inevitability run into a situation where we have a fantastic location but we can’t use it (or can’t use it as much as we want) because a named actor isn’t scheduled to play those dates. In a lot of ways, the smaller the budget, the easier the production is.

What was the most out of the ordinary crisis you had to deal with?
DEVIN: The school bus we booked. I booked a short bus for the film (I thought it’d be funny) and it ended up only having two seats AND broke down for six hours. At the end of the day, you just have to laugh. If you let things like that get to you, the movie will never get made. Appreciate the absurdity of filmmaking and you’re golden.

Thinking of your last four films where were a disaster film, zombie, family movie, and comedy with lots of nudity.  There must significant differences getting those films produced, can you highlight the major differences?

DEVIN: Usually family movies/comedy movies are far easier to produce then films with huge fx/stunts, etc. It’s nice to have a production schedule that swings between disasters movies, then back to comedy/family films. Gives me a little chance to rest up in between the bigger shows. One film that I did over the summer called for practical wind and rain effects everyday on set. That might have been the most frustrating element I’ve had to produce yet. “Just add water” as they say…

Keep an eye out for Devin’s future films and follow him on Twitter to see what he’s up to.