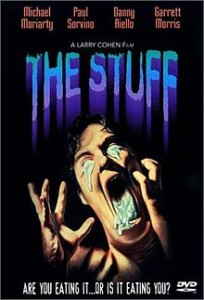 Larry Cohen wrote episodes for the Emmy award winning “The Defenders” along with many other TV series in the 60s and early 70s.  He wrote dozens of independent films including ‘It’s Alive’ and the Maniac Cop trilogy.  He reached a new audience with “Phone Booth” and “Cellular”.

Back to the good ole eighties, ‘The Stuff’ brought back some fun and comical memories.

“A delicious mysterious goo that oozes from the Earth is marketed as the newest dessert sensation. But the sugary treat rots more than teeth when zombie-like snackers begin infesting the world.” The story builds when the ice cream companies send David ‘Mo’ Rutherford (Michael Moriarty) to investigate what Stuff is made of.

When I originally saw this movie back in the eighties I actually wanted to eat tons of Marshmallow Fluff in hopes of becoming a cool zombie, but only got a major sugar high that got me grounded.

In addition to the fun special effects, Larry wrote some comical dialogue.

“They call me Mo, cause when I give they want mo”.

Once taken over the person is referred to as a Stuffy.  “Come on you stuffy son of a bitches”

Kid tries to destroy all stuff in the store and faintly in background you here “clean up in aisle seven”.

There also are scenes to watch for that simply cracked me up as they were thrown in for no reason. Like when a lady is uncomfortable in bed and she loudly cracks her neck and then goes to sleep.

A classic moment is a commercial for the Stuff with special guest Abe Vigoda, Laurene Landon, Brooke Adams, Tammy Grimes and Clara Peller asking “Where’s the The Stuff?”

‘The Stuff’ can be a drinking game too.  Take a shot every time you see any 80s type merchandise. Just a couple examples:

When you’re in the mood for an eighties flashback check out ‘The Stuff’
If you have some thoughts to share about this article or you’d like to discuss B movies with other B movie fans and filmmakers please visit our B Movie Nation Facebook group.