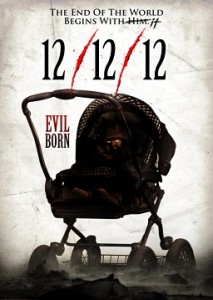 Written and directed by Jared Cohn “12/12/12” is a dash of “The Omen”, “Rosemary’s Baby” and “It’s Alive”.  It begins with a sacrifice involving blood rubbed on a naked woman then we go right to the maternity ward for an intense birth.  Even though birth is a magical moment, it definitely can be very gory, scary, and incredibly painful…for the mother too.  During the disturbing complications the father Carlos (Carl Donelson) freaks out and is escorted out and into the waiting room.  Why why why aren’t the fathers allowed to smoke in the waiting area anymore?  The first ten minutes of the movie will have you hooked.

I have to point out the shot right after the birth it was disturbing and could be a poster for the film.  It had Veronica (Sara Malakul Lane) holding newborn Sebastian with two bodies on either side of the hospital bed and the room and everyone was covered in blood and afterbirth.  Heck of a shot!

Being a horror film there has to be some intense scary moments and the thing I appreciated is that the scenes were well written so not a lot of special effects were needed. The actors did a good job especially the crazy looks that Sara had when her reflection in the mirror was talking to her.

I was curious how things would end since Veronica loves her baby even though he’s technically a serial killer and not even a month old.

I had to laugh when Veronica’s sister was in her robe after a shower and baby Sebastian was sitting nearby and she calls him a pervert and goes on a rant to her sister how much of a pervert he is. 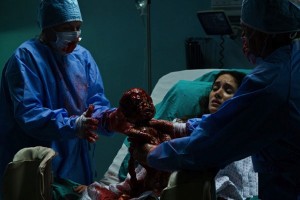