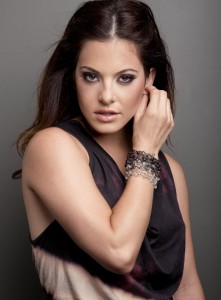 Olivia Alexander did a great job playing the mean girl head cheerleader in “Attack of the 50 Foot Cheerleader”.  Olivia’s acting began at the very early age of 2 when she appeared in “Little Debbie’s Snack Cakes” and “Ultra Gain Detergent” commercials.  She’s also been dancing and singing since a young age and has won national dance titles.  We’ll be seeing a lot more of Olivia in future films and thank her for sharing her filming experience with Roger Corman and about herself.

You’ve worked with two amazing film makers, Roger Corman and Charles Band in ‘Killer Eve: Halloween Haunt’. Did Roger or Charles share with you any advice or encouraging words that stuck with you?

OLIVIA: Having spent more time with Roger (getting to promote cheerleader by his side at Comic Con), I could write a book on the lessons I learned from him. He is a storyteller at heart, so there wasn’t a moment when he wasn’t telling some incredible story about the talented people he has worked with.  I think the most valuable thing I learned from Roger was to remain genuine rebel.  He did it his way and never sold out. He is the kindest gentlest man, but he is a rebel at heart. He’s a risk taker and fearless when it comes to his filmmaking. That’s why he has discovered the most influential filmmakers, producers, and actors of our time. He’s not afraid of making a movie without a name or taking a risk with the content.  I will aim to never play it safe with my work. I want to always be out of my comfort zone because that’s where real magic happens.

You and Jena did a great job especially with the fight scene. How did you prepare for that scene and did anyone accidentally get injured?

OLIVIA: We learned the entire fight and rehearsed it into the ground!! Jena and I had been preparing for it on our own with a lot of training.  I am a trained dancer and yogi, but I did 6 weeks of cheer before the movie. It helped me get into my character.

The fight was separate from everything we did on location in LA. We had two ninja turtles and one amazing stunt choreographer. It was just Jena and I on a freezing green screen stage. We just threw caution into the wind and lost our minds! I definitely made Jena bleed at one point! You can’t have a Corman catfight without real blood! I felt super bad about it, but she was a total pro about it! We were both really banged up, but who can say they have been in a 50-foot cheerleader catfight? 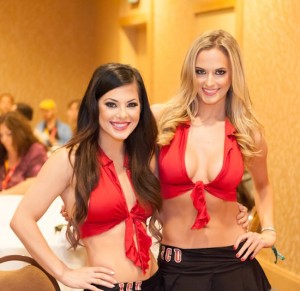 What was the most rewarding part of acting in this movie?

OLIVIA: The most rewarding part of playing Brittany was the freedom. Kevin O’Neill is a special effects director, so when it came to acting he let me run wild! Roger is also a VERY laid back producer, when it comes to the work. If I had a question, I was guided, but I was never told what my choices had to be. Having gone on to do other films, I now see the value in their trust. Being free to make mistakes and make my own choices is something that doesn’t happen that often.

Do you still dance and sing?

OLIVIA: Yes, I am always still dancing and singing! I put out my EP ‘It’s On’ around the time of Attack of the 50 Foot Cheerleader. All the music was in the film thanks to our director Kevin O’Neill. He was extremely supportive of my music and helping me contribute music to the film. Since then some of the music has been placed in a few other shows and I have been in the studio non-stop. I am putting out a few new songs in early 2013. Eventually, I want to put out a full-length album. I am writing and recording everyday. I don’t want to rush the album, especially while I am still experimenting with genres! 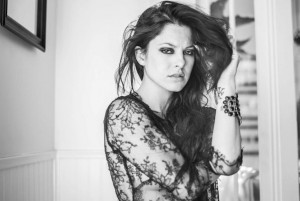 What are you up to next?

OLIVIA: On January 15, I have a horror parody film being released called (deep breath) “30 Nights of Paranormal Activity With the Devil Inside the Girl With the Dragon Tattoo” on VOD, Blu Ray, and DVD. I am currently in the middle of shooting Christian Winters directorial debut OLD 37, with legends Kane Hodder and Bill Moseley!

Written by Mike MacLean and directed by Kevin O’Neil Starring Olivia Alexander and Jena Sims.   It’s a feel good movie for everyone…mostly men in their late teens to senior citizens.

Anytime you see someone working in a lab on an experimental serum, you know something is going to go wrong.  Here we know the serum will make Cassie (Jena Sims) a 50 foot cheerleader.  Is that really something that went “wrong”?   Long before Cassie grew 50 feet I was enjoying the film, good acting, it’s funny and it had a good story that made us feel sympathetic towards Cassie.  I have to credit Mike MacLean for his ability to slip in a lot of comedy that worked with the scenes and not just thrown in to get a laugh.  Most of it is subtle and you catch different things the more you watch it.

Just a few highlights to watch for: