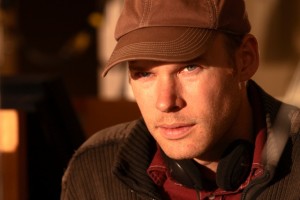 Jason has directed and wrote a couple dozen films including many disaster films.  Growing up a horror fan he was determined to create his own horror and disaster film and he did just that.  A few of his thrilling films are”Dark Storm”, “Doomsday Prophecy”, “Seattle Superstorm”, and upcoming “Stonados”.  Jason has been very busy filming the last decade and was generous to share his experiences with Bmovienation.

How did you get into writing and directing storm and disaster films?

JASON: I grew up on “Fangoria”magazines with dreams of writing and directing the next big horror epic. Early short films had titles like “Dead Skin” and always involved Sam Raimi’s recipe for fake blood but after film school I found it was hell trying to get my own projects off the ground. So I began working with “Insight Film Studios”, a doc company that had just started doing movies of the week. I discovered the disaster mow was a lucrative niche; they sell well internationally. In 2006, Insight teamed up with Cinetel Pictures who had an output deal with SyFy. I was given the opportunity to pitch for my first “Storm” movie – “Dark Storm”, starring Stephen Baldwin. My director’s pitch was stuffed full of visual references (I’m a visual arts grad) and it gave me the edge over the veterans. Like usual, directors on low budgets gotta do a whole lot of re-writes to make a script “production friendly”. Cinetel gave me a writing credit and I guess that’s how I fell into the sci-fi disaster genre. I went straight from that into “Termination Point” – a worm hole time travel disaster flick. Alas, my soul still aches for the opportunity to direct a creature feature gore fest. I really enjoy the disaster genre though and I always give it a 110 percent. I never panic, but I love how these scripts always read like a Roland Emmerich movie, yet we have only fifteen days and a 2 million dollar budget.

With all the disaster films you’ve done, do you learn something unique or new from each one to use in your next film?

JASON: I’ve written or co-written eight disasters including two mini-series. As a director, I’ve gotten six under my belt so I got a pretty good handle on quick suspense gags, blocking techniques and creating big bang for the buck. If a technique works well, especially for a stunt, I’ll keep that in my bag of tricks for the next one. Coming up with new ways of creating apocalyptic mayhem is always a blast. I go out of my way to make it as realistic as possible (Wikipedia is my savior!), even if I’m dealing with magnetic tornadoes or killer ice fog. While directing disaster I’ve discovered you can never have too many air cannons. I love them. Compressed air, cork and dust with a big explosion sound effect and it’s cinematic chaos. I think my action set pieces have gotten more ambitious as I direct more. Taking down the Space Needle in “Seattle Super Storm” is probably my favorite to date, although “Stonados” has some truly epic destruction. 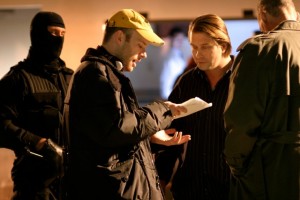 Dominka Julliet wrote and starred in “Under the Cover” in 2003. Since then she’s been in several of your films. Do you two have a strong working relationship?

JASON: Dominika is the most creative person I know. Our first collaboration was out of a mutual need to have a calling card film. She wrote and acted in it and I directed and produced. I paid for it on my Visa; we used gear from the local film co-op and it spawned a wonderfully warped mini-series for CBC after we won a national competition. We went on to write several scripts together including a gory 80s style slasher called “Meat Puppets” and our creative opus – “Unrequited”, a creature feature western. “Unrequited” has come so close to getting made. Luc Besson’s company had it for a while; there were offers to buy the script but we’ve always held on to it. Dominika wrote it to play the lead and I wrote it to direct. It’s fully developed and ready to go but always hard to get that darn finance. Along the way, she’s acted in a number of my films. Currently she’s carving out a niche as a SyFy gal with “Dragon Wasps”, “Dracano” and “Sinkhole”. Lately we’ve been collaborating on “Disarm”, an action flick which may go before “Unrequited”.

How did you get the directing job for “Wildfire 7: The Inferno” and how that experience overall?

JASON: The order of this is pretty funny – I had just directed a crazed art house music video called “Sex and Drinking” which involved thirty naked people in a bar. A producer popped by the set, saw everyone naked and also liked the fact I hit 65 camera set-ups in one day. He recommended me to producer Kirk Shaw who hired me to direct a movie called “Game Over”. It turned out Kirk had gotten the rights to some footage from a defunct video game called “Maximum Surge” starring Walter Koenig (Chekov from “Star Trek”) and Yasmine Bleeth. So for very little money we built an eight day movie around the footage using a virtual reality plot. The result was really cruddy but kinda fun and luckily it sold. So now I had directed my first flick without even meeting my marquee leads. Kirk followed it up with “Wild Fire 7” – an mow for PAX starring Tracey Gold fighting a giant forest fire and he handed me the directing reins because I pulled off the last one on time and on budget. The overall experience of “Wild Fire 7” was mixed. The special effects turned out freakin’ terrible but I had a wonderful time directing it and it had a heart. No burning corpses though. Todd Williams, one of my favorite DOPs, worked on it with me and I try to get him on all my projects. He did an amazing job on “Seattle Superstorm”.

When will “Stonados” be aired and can you tell us what to expect from it?

JASON: “Stonados” premieres on SyFy at 9:00pm on April 27th. Finally I got the chance to do some creative kills! I think SyFy fans are going to be impressed by the scope. Unlike the usual SyFy Original, this has a very urban setting. Also we use a whole lot of practical FX mixed in with the CGI . “Encore”, the guys behind “Supernatural” and “Beauty and the Beast” handled lots of rock flying devastation. It’s also the most stunts I’ve ever had in a film. It truly looks like we hurt people; the action set pieces keep getting bigger and bigger… we go from a busy downtown harbor to a Boston rowing regatta to a football stadium full of fans getting shredded by a Stonado.

Our stunt coordinator did the last “Resident Evil”; our FX guy worked on “District 9” and our composer works with Michael Mann. Plus we had a very committed cast who gave it all while choking on air cannon debris and dodging exploding styrofoam rocks. It all came together into a hugely ambitious B movie epic driven by serious passion for the material. I was lucky enough to have that rub off on the crew and it shows. I think “Stonados” is gonna provide serious competition in the ol’ tornado disaster sub genre. “Sharknado” won’t know what hit it. Oh wait… it was a giant exploding rock. 🙂 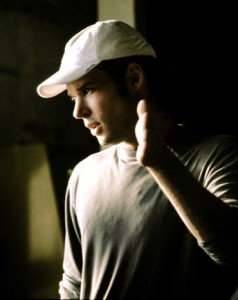 Very exciting!  Looking forward to the release of “Stonados” and many more films by Jason.  Keep current with Jason and his projects on his IMDB and follow him on Facebook and Twitter.