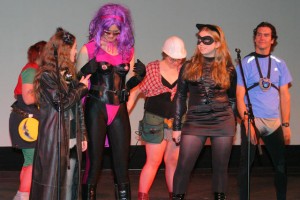 Christy and Darin been working together for a couple decades and had their own horror and exploitation cable TV access show.  An opportunity to do a grindhouse-style midnight movie festival came about in 2001, which at that time Amy was brought on board. 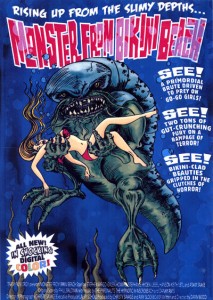 In addition to their shows, TFO makes movies and brought us the entertaining films “Monster from Bikini Beach” and “Planet of the Vampire Women.”

Planet of the Vampire Women 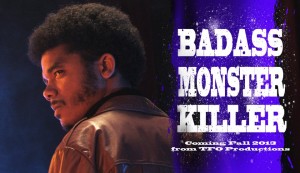 BADASS MONSTER KILLER is an action-packed thrill ride of monsters, mayhem and madness…an homage to 70s Blaxploitation classics combined with the sheer terror of H.P. Lovecraft’s Cthulhu Mythos, it promises to be unlike anything you have ever seen before!

Synopsis:
On the trashy side of Camaroville, there’s a mob turf war going down, but the new gang in town ain’t content with merely controlling the local dope and sex trade. They are also mixed up with dangerous black magic, intent on resurrecting hideous demon-gods who have waited centuries for the chance to eat all our souls and enslave mankind!
These blasphemous bad guys need stopping, and Jimmy Chevelle, agent of The Department of Supernatural Security, is just the cat to do the stopping. He hasn’t let the man keep him down, and he’s certainly not going to let some sinister shape-shifting suckas destroy the earth, and all of its foxy, foxy chicks, if HE can help it.
But can he stop the gangster cult’s evil plans in time? Get ready for a freaky, funky thrill ride with demonic pimps, kung fu super foxes and terrible sanity-shattering extraterrestrial horrors from beyond space and time!

TFO emphasizes fun at your shows. What can be expected at a typical show?

CHRISTY: Indeed. We at the Trash Film Orgy are all about the fun!! A ‘typical’ show might go something like this…You wait in line with a bunch of freaks (and remember to ask for your discount because you have come in costume!) to enter the Beautifully Historic CREST THEATRE…once inside, you are approached by bizarre characters and encouraged to partake in an array of strangely themed carnival type games with the lure of FUN and PRIZES. (This may be the perfect time to visit the Crest Lounge for Beer or Wine to give you a little more Liquid Courage). After playing ridiculous games (themed to each night’s movie) such as What’s Inside Grandma, Old-West Zombie Shoot-Out, Metal Karaoke Challenge, Spanking or Make your Own Voodoo Doll, you enter the main theatre…a wondrous 975 seat Picture Palace beautifully renovated to all it’s old time glory. There’s a DJ playing records and a Large Tiki God waiting patiently near the side of the stage, as Trash Fans wander in looking for seats. You find yours and settle in for a night’s entertainment. The Music switches to a Trash Song that all the regulars sing along with and the lights dim…the Mighty Tiki Comes to life and welcomes you to the Trash Film Orgy. Now, you direct your attention to the stage for an original, often bloody, live introduction skit on stage. This could be anything from a Musical Number (Dead Side Story was my favorite!) to a Special Guest to an interactive dance party to simply warning patrons about being safe on the streets. After the stage show, the teaser reel starts, which includes trailers for upcoming shows, as well as cartoons, educational films, old theatre ads and assorted shorts, including many original seen-only-at-TFO favorites. Once you have been properly warmed up, we will start the Main Feature, a cult, horror or exploitation classic presented in 35mm. But oh no…this is not simply quietly sitting and watching the movie…there are often interactive features DURING the film, such as Stab-O-Vision or Grizzly attacks! And whether we like it or not, there is heckling, quoting and the sort of general merriment you get when watching a fun film with 300 of your closest friends. But wait…that’s not all. During intermission, there is more music, more games and more drinks, before you settle back in for the remainder of the movie. The Trash Film Orgy is much, much more than a typical movie show….you have been warned.

Your first TFO show as back in 2001. How much if anything has changed since then?

CHRISTY: The general atmosphere and overall show experience is pretty much the same. We have less activities out front now, but that is based more on development of the street and the neighborhood. Our audience has changed but has stayed primarily in the 18-35 age range. From the experience of doing so many shows, we have become more organized and more efficient. The only big difference, I think, is that our Zombie Walks have become huge, stand alone events bringing out well over 1000 people every year now (much different than our first ones in 2001)

The films you produce are all written and directed by TFO partner Darin Wood. How did Darin get to be so fortunate to be your sole writer director and any chance you’ll do any writing or directing?

CHRISTY: Darin and I have been working together on film and video projects for over 20 years (we’ve been married for 19), so we have a very special working relationship. He has always been our primary writer, although when we first started I would also direct. It became apparent early on that what we were missing was a good producer, though, so I stepped up to fill that role. While he writes and directs, I produce and shoot and then we work together on editing and post-production. For most of our projects, we also have a 3rd TFO partner, Amy Slockbower, who is very adept at adjusting to fill whatever role needs to be filled on set. While I may at some point step into the director chair, I’ll stick to writing only press releases and promotional materials.

There’s typically three years between your films. What is TFO’s process to come up with a new film, starting with the concept?

CHRISTY: Ugh. While we are working towards doing at least 2 movies a year ideally, we are currently still in the do-everything-ourselves micro-budget production mode and that’s why it takes so long. As we finish up one film, we will be starting the next. Darin will finalize a script (he always has multiple scripts in progress), while Amy and I start looking for funding and figure out how to get it off the ground. We’re strong believers in always making a new movie, regardless of funding woes, so often this means just moving forward without all the elements in place. Unfortunately, the fund-as-you-go model tends to mean production takes longer than it really should, as long as 6 months sometimes! But we persevere and make it happen somehow. And then we get into post-production, which also seems to take a while as money trickles in. We often end up doing most of this work ourselves, as well, with little or no money. But once the film is finished and we have the Big Premiere, it’s all worth it. But not over, of course….it’s followed by months, even years of marketing, promoting and securing distribution to get these babies out in the world. Low-Budget filmmaking is ridiculously hard work, but we wouldn’t trade it anything! (except maybe big-budget filmmaking!)

What is the current production status of “BadAss Monster Killer” and what is your target release date?

CHRISTY: BADASS MONSTER KILLER is our latest feature. It is currently in post-production and we are planning for a fall 2013 premiere. As funds have been slow coming in, it will likely be the late fall, but before the end of the year! This is the most time-consuming part of the project, for sure! We’re striving for a very unique look and approx. 3/4 of the film have total CGI environments, much like Cool World or Sin City. While this is rather unheard of in the micro-budget world, it is not undoable. We’re proving that filmmakers really are only limited by their imagination, no matter what their budget!

Looking forward to TFO’s “BadAss Monster Killer” and wish them the best of luck completing the film. Check out their website and Facebook pages for more information.