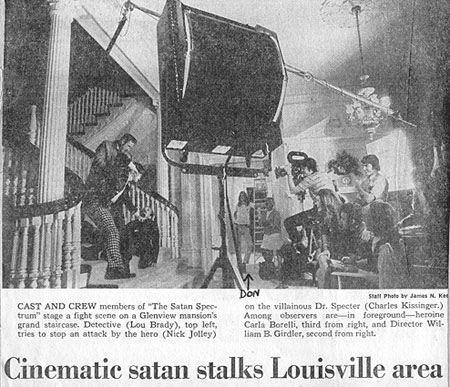 When one thinks of regional filmmakers, the name of William Girdler stands high indeed. Based out of Louisville, Kentucky for most of his career, Girdler made nine films between the years 1972 and 1978, in a variety of genres from horror to political thrillers to blaxploitation. While some say his film work was less than stellar, it was nevertheless highly profitable and it got him enough notice to work with many major names like Christopher George, Lynda Day Georges, Richard Jaeckel, Leslie Nielsen, Tony Curtis and Susan Strasberg.

Girdler was born in Jefferson County, Kentucky on October 22, 1947. Born into a prominent Louisville family, he had a passion for the camera at an early age. After serving in the Air Force, Girdler formed Studio One with his best friend and brother-in-law J. Patrick Kelly. Focusing on TV commercials at first, the company soon switched over to cinematic pursuits, changing its name to Mid America Pictures when Girdler’s films began showing commercial profits.

In the course of his career, Girdler directed nine features, wrote six screenplays (including three, which he directed himself) and several music scores. He made his first five features in his hometown of Louisville, but always retained his Kentucky contacts when the opportunities arose to make his films elsewhere. Some of his friends have said his penchant to make films fast and cheap stemmed from a premonition that he would die by the age of 30. That premonition would eerily come true in January of 1978 when Girdler was killed in a helicopter crash while in the Philippines scouting locations for his next film.

Girdler’s first two films were essays in the horror genre. Asylum of Satan (1972) and Three on a Meathook (1973) were both mildly profitable, but they brought him to the attention of American International Pictures executive David Shelton, who would be a key collaborator in future Girdler productions. For AIP, Girdler directed three blaxploitation pictures, The Zebra Killer, Abby (1974) and Sheba Baby (1975), starring Pam Grier. Abby earned $9 million in its release, but was pulled after two weeks in theatres due to a lawsuit from Warner Brothers, who felt the film’s plot too closely resembled their hit film The Exorcist.

After leaving AIP, Girdler next directed a political thriller Project: Kill (1976) starring Leslie Nielsen, with Girdler himself expressed his being the proudest of all his films. Soon after, he returned to horror with two of his most prominent films, the Jaws take-off Grizzly (1976), his most profitable film grossing $39 million in its release, and its follow-up Day of the Animals (1977), which dealt with an environmental catastrophe that caused animals of a forest to go berserk and attack various hikers.

For his final feature, Girdler bought the rights to Graham Masterson’s 1976 novel The Manitou. He got Tony Curtis and Susan Strasberg to star in this tale of a long-dead Indian medicine man who is resurrected from the dead via a fetus on the back of Strasberg’s neck. The film was picked up for release by Avco Embassy Pictures and would also proved to be a hit. Unfortunately, Girdler would not live to see the fruits of his labors, due to his death.

William Girdler today remains best known and loved for his go-for-broke style of filmmaking and his films are still cherished by B-movie fans everywhere.